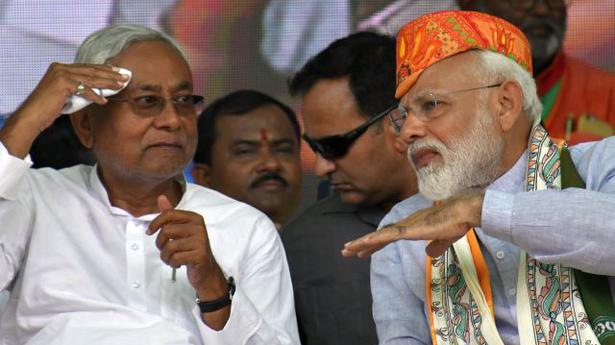 Rebuffing the Opposition’s criticisms that the ruling NDA was using the national security issue for electoral gains, Prime Minister Narendra Modi on Thursday said rooting out terror was essential so that the money could be used to improve the living conditions of the poor.

Addressing a rally in this north Bihar town, Mr. Modi also claimed that Congress-led opposition was in jitters after the “favourable response” to the NDA in the first three phases of elections.

He alleged, “The Mahamilavati gang has given up seeking proof of Balakot terror strikes and started finding fault with EVMs.”

In a veiled attack on Lalu Prasad’s RJD, the prime minister commended Chief Minister Nitish Kumar and his deputy Sushil Kumar Modi, for bringing electricity to the remotest village in the State and making the ‘lantern’ the opposition party’s poll symbol redundant in Bihar.

Both Nitish Kumar and Sushil Kumar Modi were present on the dais.

Mr. Modi also spoke about the “Darbhanga module” of home-grown terror and told the rally “rest assured, your chowkidar is alert”, evoking huge applause from the crowd, which chanted slogans in praise of the Prime Minister.

In an indirect reference to the local RJD candidate Abdul Bari Siddiqui, who had recently stoked a controversy saying he could not recite ‘Vande Mataram’ since it went against his monotheistic religious beliefs, Mr. Modi asked “should not they be defeated in a manner that they have to forfeit their deposits?”

Mr. Modi also mocked regional leaders nursing Prime Ministerial ambitions, saying, “Even those who are contesting a mere 40, 20 or — as we see in Karnataka — just eight seats seem to be standing in the queue.”

“Can these people be entrusted with the task of fighting terror?” Mr. Modi asked, the question evoking a deafening ‘no’ from the crowd, to which he replied, “But your chowkidar cannot win this fight on his on. He must get your votes.

“Remember whether you vote for the BJP candidate here or elsewhere or any nominee of our alliance partners, your vote would go to the chowkidar,” he said.

Prime Minister Narendra Modi on Monday categorically rejected any scope for third party mediation between India and Pakistan on Kashmir, saying the two countries can discuss and resolve all issues bilaterally and “we don’t want to trouble any third country.”  Mr. Modi made these remarks while interacting with the media alongside U.S. President Donald Trump, […]

A group of over 200 journalists has condemned the FIR filed against founding editor of news portal The Wire Siddharth Varadarajan by the Uttar Pradesh police. The group consisting of journalists from both print and electronic media termed it a brazen attempt to muzzle the media. Also read: Editors Guild criticises U.P. govt. The police […]