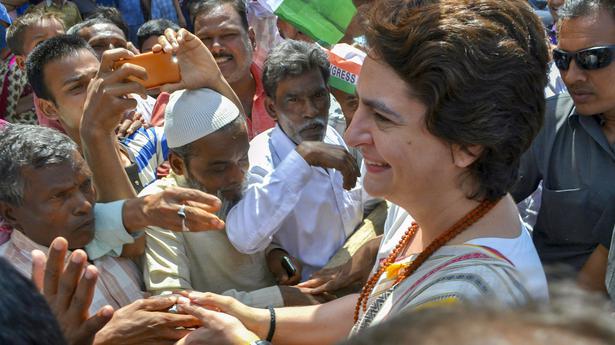 Prime Minister Narendra Modi should stop thinking that people are fools and understand that they see through everything, Congress leader Priyanka Gandhi Vadra said on Wednesday.

The Congress leader, who is in charge of eastern Uttar Pradesh, is on a three-day boat journey down the Ganga, meeting people living on the banks of the holy river as part of her outreach ahead of the general election beginning on April 11.

“The Prime Minister has attacked every institution in this country for the last five years, including the institution of which all of you are a part,” Ms. Priyanka Gandhi said.

“So I think the PM should stop thinking that people are fools and understand that they see through all this,” she added.

The Congress general secretary went on to say that she is not afraid of being “harassed”.

Speaking at a ‘chaupal’ near a temple in the city late on Tusday evening, Ms. Priyanka Gandhi blamed the Modi government for “not doing anything” for the development of the country.

“This government has given only lollipops,” she charged.

She said politics should be done for the development of the country.

Talking about employment created during the Congress-led dispensation, she said, “The Congress government had given the biggest employment guarantee programme MGNREGA.”

But under the BJP government, she alleged, machines were replacing labourers.

“If the Congress is voted to power, it would work for farmers and the poor,” she asserted.

India has co-sponsored a UN General Assembly resolution that called for a fair, transparent and equitable access to essential medical supplies and any future vaccines developed to fight COVID-19 that has claimed over 177,000 lives and infected more than 2.5 million people. The 193-Member General Assembly adopted the Mexico-drafted resolution ‘International cooperation to ensure global […]

‘80 nations have taken up special projects on Gandhiji’

Expressing concern over Mahatma Gandhi being subjected to criticism and condemnation in his own country, Additional Commissioner of Public Instructions (DPI) Siddhalingayya Hiremath said that most of those misconceptions about Gandhiji have emanated owing to lack of proper information about his life and works. Inaugurating “Gandhiji 150-Kuncha Namana”, a five-day Belagavi divisional art teachers workshop […]