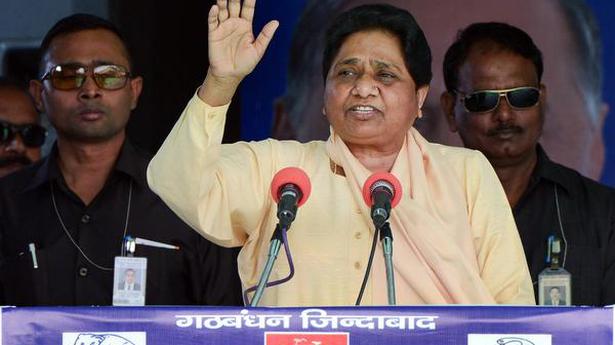 BSP chief Mayawati on Sunday accused Prime Minister Narendra Modi of trying to create differences between her party and the SP as he feared the BJP was lagging in the first four phases of polling in Uttar Pradesh.

Ms. Mayawati said the Modi government had made every attempt to try and “break and hurt” the SP-BSP alliance including the “misuse” of the official machinery as part of a conspiracy.

The BSP chief’s attack came a day after the PM suggested at a rally in Pratapgarh that the SP and the Congress were playing behind the back of the BSP with a tacit understanding.

Mr. Modi said Congress leader Priyanka Gandhi Vadra’s remark that her party would play a spoiler for the BJP where the Congress did not have a strong candidate, applied only to the Samajwadi Party seats and not to those contested by the Bahujan Samaj Party.

“Congress leaders are happily sharing the stage with Samajwadi Party leaders in rallies. These people have betrayed Behenji [Ms. Mayawati] so cunningly that even she is not able to comprehend what is going on. The party which was staking claim to the Prime Minister’s post before the first round of polls [Congress], now admits to being a vote cutter,” he said.

In her retort, Ms. Mayawati said sensing that his party was lagging in the first four phases, Mr. Modi was trying to create differences between the two parties through the “divide and rule policy” so that the party could save its honour in the remaining three phases.

She said the PM’s comments were baseless and intended to only mislead the supporters of the two parties.

Ms. Mayawati went a step ahead and said every vote of the SP and the BSP, especially of the latter, in Amethi and Rae Bareli would be transferred to the Congress.

The BSP chief said the alliance was “not just for the present but also the future and will also go on to overthrow the narrow-minded, communal, casteist and arrogant government in U.P..”

IRCTC to pay compensation after delayed run of Tejas

A delay of more than three hours in the running of the Delhi-Lucknow Tejas Express on October 19 has cost the IRCTC around ₹1.62 lakh which the railway subsidiary will pay through its insurance companies as compensation to around 950 passengers, a first in the history of the Indian Railways, officials said on Monday. The […]

The Karnataka High Court on Tuesday turned the concept of virtual court into reality by digitally reaching out to an advocate in a remote location, straight from the court hall, for live hearing of arguments in a case. For the first time, digital connectivity was used not for hearing a case live from a court […]

Parts of the State are likely to experience fairly widespread rainfall in the next few days, the India Meteorological Department (IMD) indicated on Saturday. On Sunday, most districts, except Thiruvananthapuram, Pathanamthitta, Thrissur and Palakkad, can expect isolated heavy rainfall, the IMD said, issuing yellow alerts (isolated heavy rainfall) for ten districts. Yellow alerts have been […]