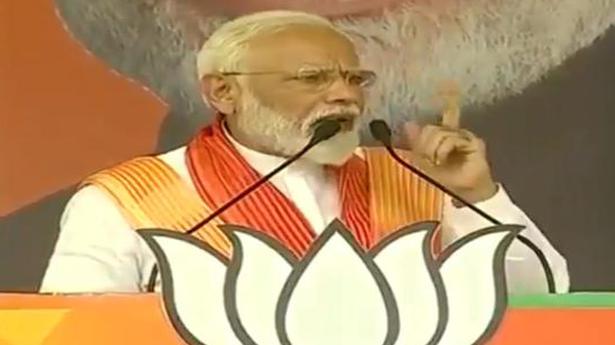 Prime Minister Narendra Modi on Sunday targeted Rahul Gandhi for his alleged association with UK firm Backops, saying the Congress president’s “scams” were being “unearthed from land, air and water”.

Referring to Mr. Gandhi, Mr. Modi while speaking at rally in Madhya Pradesh’s Sagar said the “naamdar” gets exposed every time he tries to malign him and the more he is targeted, the more ‘lotus’ will bloom.

The Home Ministry recently served a notice on Mr. Gandhi, saying it received a representation from BJP MP Subramanian Swamy, claiming that a company named Backops Limited was registered in the United Kingdom in 2003 with the Congress leader as one of its directors.

The Home Ministry said Mr. Swamy’s letter also mentioned that in the British company’s annual returns filed on October 10, 2005 and October 31, 2006, Gandhi’s date of birth has been given as June 19, 1970 and had declared his nationality as British.

Referring to Mr. Gandhi’s alleged association with the company, Mr. Modi said, “His scams are being unearthed from land, air and water.”

“The ‘naamdar’ in an interview mentioned that his aim was to malign my image. But more the mud he throws at me, better the lotus will bloom,” he said.

Mr. Modi said even as Mr. Gandhi abused him, the latter himself was getting exposed.

“He owned a company called Backops in England which was shut in 2009. But in 2011, a partner in the company got a submarine deal contract. The government was of the Congress. How did the Backops partner get the deal, what was his experience in defence contract?” Modi said.

Mr. Modi alleged that due to Congress’s “criminal apathy”, the country has been deprived of basic amenities like pucca houses, electricity, toilets and bank accounts during the first 25 years of Independence.

“Had the Congress remained in power, I am confident that basic amenities would have alluded the country for another 100 years,” he said.

Mr. Modi said perpetrators of terrorism are now fully aware that it is a new India which hits them back by entering their dens.

“Your each vote in favour of Modi will inspire him to fight against terrorism with vigour,” he added.

The Centre on Monday approved a ₹453-crore loan at a subsidised interest rate of 5% to the Tamil Nadu government for setting up three fishing harbours. The funds will be released from the Fisheries and Aquaculture Infrastructure Development Fund (FIDF) that has a corpus of ₹7,522 crore. An agreement was signed between the Union fisheries […]

Two policemen in Uttar Pradesh’s Siddharthnagar district were suspended on Friday after they were caught on camera thrashing and humiliating bike rider allegedly over a traffic violation. The footage of the incident was widely shared on social media, following which sub-inspector Virendra Singh and head constable Mahendra Prasad were suspended, police said. The matter relates […]

An undertrial accused of murder was shot dead inside a courtroom in Bijnor district of Uttar Pradesh by three persons, police said on Tuesday. All three accused were nabbed by the police while they tried to flee the scene. The SP of Bijnor said the three persons shot the undertrial, Shahnawaz Ansari, inside the courtroom […]