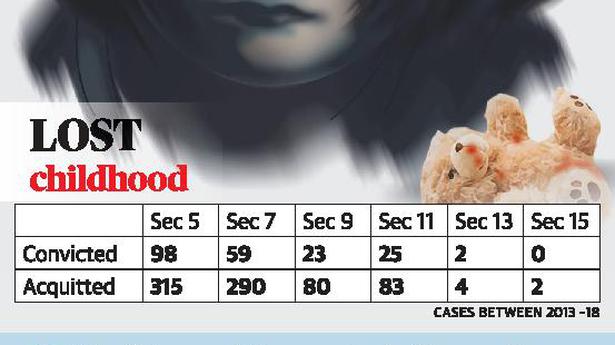 The overall conviction rate in cases registered under the Protection of Children from Sexual Offences (POCSO) Act, 2012, across the State has been just around 18%, say data released by the Childline even as protests continue over the acquittal of the accused in the rape and death of two minor siblings at Attappallam, near Walayar.

However, the accused in only 230 cases were convicted while those in the rest were acquitted. The conviction rate is just 18.32%. The highest number of cases, 282, was from Kozhikode and only 23 of them were convicted.

This was besides the cases that do not reach the courts due to various reasons or end up in out-of-court settlements.

P. Suresh, Chairman of the Kerala State Commission for Protection of Child Rights, told The Hindu that the false nature of complaints was one of the reasons for the low conviction rate.

“Even the Kerala High Court has condemned the way in which the Act is being misused amid family disputes. There have been cases in which the mother files a case against the father for sexually assaulting their daughter, just to make the divorce easier,” he said.

Another reason, he said, was due to the victims or witnesses turning hostile after a certain stage. “The police, prosecution, and the court become helpless in such cases,” Mr.Suresh said. This tendency was more in cases where the accused were close family members.

Mr.Suresh said Kerala topped the country in the number of POCSO cases being reported not because of an increased crime rate, but due to increased awareness about child rights among the people.

“However, there is still a lack of awareness regarding the nuances of the POCSO Act,” he said.

“POCSO Act is a very complicated law. Even minor offences seem serious when brought under its ambit. People create an uproar without understanding its nuances,” he added.

Members of the women’s wing of Mandya District Congress Committee staged a protest here on Saturday to oppose the hike in the price of LPG cylinders and the alleged failure of the Centre in curbing the increasing cost of essential commodities. The protesters took out a rally from their office to the Deputy Commissioner’s office […]

Morning Digest: ICMR reports a huge spike in infections in a single day; Govt nod mandatory for FDI from neighbouring countries, and more

In a move that will restrict Chinese investments, the Centre has made prior government approval mandatory for foreign direct investments from countries which share a land border with India. Previously, only investments from Pakistan and Bangladesh faced such restrictions. In a major spike in COVID-19 cases, the Indian Council of Medical Research reported that a […]

N. Ramesh Kumar, whose five-year tenure as the State Election Commissioner (SEC) was cut short by an ordinance brought by the government on Friday nig challenged it in the Andhra Pradesh (A.P.) High Court (HC). He appealed for declaration of the ordinance (No.5 of 2020), and the G.Os through which Madras High Court retired judge […]