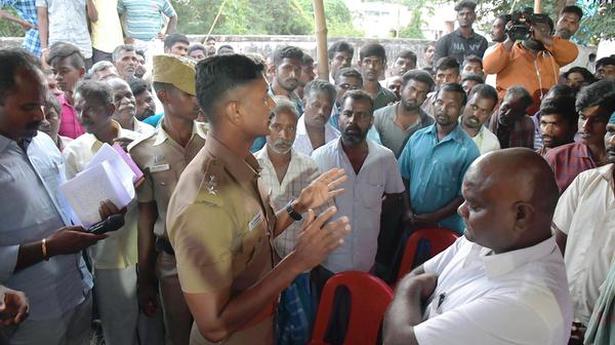 “It was like a dream that I would rather forget. I did that for the sake of my family and I have decided to give up that trade for the sake of my children, who have grown up to school-final level,” says 43-year old G. Viswanathan of Paradharami, who wants to quit liquor brewing.

He wants to take up cattle rearing and has no clue how to go about it given the limited access he has to officials due to the trade he pursued all these years. But he is bent on leading a peaceful and respectable life for the sake of his family.

The Ranipet district police organised a meeting at Sambasivapuram in Arcot taluk on Monday to rehabilitate liquor brewers like Viswanathan and provide them with alternative livelihood options.

More than 1,000 families were residing in villages around Sambasivapuram and many families were engaged in brewing illicit liquor across several forest and hilly areas.

In the past six months, several raids were conducted across Ranipet district, and illicit liquor trade cases have been registered against 30 persons. Similar seizures, demolition of dens and arrests of hundreds of people were also recorded in the district, when it was with Vellore district. These raids and their aftermath highlighted the seriousness of the problem and the impact it had on underprivileged families.

Superintendent of Police, Ranipet, A. Myilvaganan said: “Brewing of illicit liquor is a severe problem in the district, prevalent mostly in areas surrounding the hills. It has adverse health impact on women and children. There have been instances where we have come across underprivileged people spending their entire earning on hooch and even found women, youths and children getting addicted to country liquor and spoiling their future.”

“In a recent raid held early this month, 115 police personnel conducted massive search operations in these regions and destroyed thousands of litres of fermented wash and other apparatus used for brewing liquor. More than 12 persons have been booked and imprisoned as per court order. Recently (Bun) Kumar, a notorious gangster involved in illicit liquor trade surrendered claiming that he wants to give up this trade,” said Mr. Myilvaganan.

A few families also expressed their wish to give up liquor brewing provided they were shown other avenues of income generation. A total of 52 persons, 40 from Sambasivapuram, five from Thimiri, two from Kavanur, one each from Paradharami, Karungalikuppam, Makkankudisai, Venkatapuram and Thanakulam have agreed to give up the liquor trade.

Mr. Myilvaganan said still 12 persons involved in this trade are eluding arrest. “When they surrender we will make sure they get minimum punishment and ensure measures to rehabilitate them through concerted efforts. Creating awareness about the ill effects of spurious liquor will be an integral part of this meeting. Youth should give up this, educate themselves and others on the ill-effects of the trade to erase the black mark on their villages. By doing so they can turn their tables by creating Green Lable, which is sure to make the country proud of them,” he said.

A committee comprising youth as well as elders from the village, a village administrative officer, and the respective police inspector would be accountable to the District Police on illicit brewing of liquor or liquor trade in the villages. These committees can be approached for accessing welfare schemes through proper channels, Mr. Myilvaganan concluded.

“The meeting is aimed at reaching out to these people, to educate them about alternative employment opportunities and also brief them on the availability of various government schemes, including loans, to help them set up their own business,” said Ranipet DSP R. Geetha.

The Special Investigation Team (SIT) constituted by the State government to inquire into the alleged land scam in Visakhapatnam has already recommended about 20 cases under 22A to the District Collector for denotification from the 22A list (government lands). The SIT, which had started its investigation in the month of November last year, have so […]

Jet Airways suspended all its west-bound international flights from India beginning Thursday evening till Friday morning, citing operational issues. The development came on a day when the airline informed the exchanges that it had, further to its letter on April 2, grounded 10 more aircraft. With this, the airline’s fleet is believed to have fallen […]

The CBI has taken over five more cases of abduction, attempted murder and extortion allegedly involving underworld don Chhota Rajan and his associates. The first case pertains to the abduction of one Punamchand Prithviraj Malu, a resident of Mumbai, in February 1998. The local police had earlier filed a chargesheet against Deepak Jain, Chhota Rajan […]