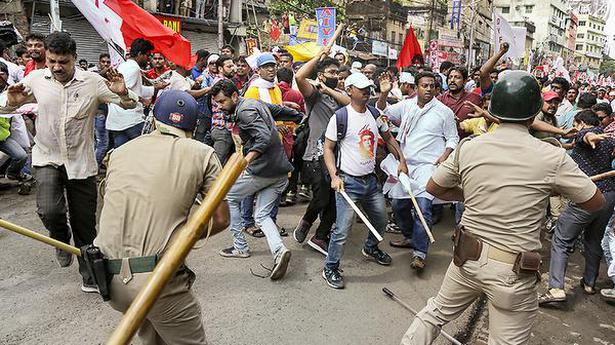 A clash erupted on Friday between the police and members of Left-affiliated students’ organisations who were marching to the State Secretariat.

The protesters had organised a march to the State Secretariat to protest against rampant unemployment.

The activists had collected lakhs of job applications from across the State and wanted to give it to Chief Minister Mamata Banerjee.

“Some of our students were seriously injured. They were protesting for the right to work and stood against disproportionate display of brute force by the police. I salute them,” Communist Party of India (Marxist) leader and Polit Bureau member Mohd. Salim said.

He also ridiculed the Didi ke Bolo campaign launched by the Trinamool Congress where people can call up the Chief Minister with their grievances. The CPI(M) leader said that when students want to meet and give deputation to the CM they are met with brute force.

The CPI(M) claimed that over 60 supporters were injured and some had to be hospitalised. The police said that five of their personnel suffered injuries.

Earlier this week, violence had erupted when BJP supporters marched to the Calcutta Electric Supply Corporation HQ in Esplanade demanding a reduction in power tariff.

Candidates of the three major political parties in Odisha — Biju Janata Dal (BJD), Bharatiya Janata Party (BJP) and Congress — filed their nomination papers for the Bijepur Assembly bypoll on Monday, the last day of the exercise. The nominees — Rita Sahu of the BJD, Sanat Gartia of the BJP and Dillip Panda of […]

National SC Commission member K. Ramulu on Friday said the Citizenship (Amendment) Act (CAA) reflected the unity and integrity of the country. The Act, which was recently passed in Parliament with an intention to build ‘Akhanda Bharat’, was being welcomed by the Hindu society at large, he claimed. “But some forces with vested interests are […]

Illa Venkateswara Rao, an independent candidate backed by the CPI(M) and its affiliated unions, got elected to the Legislative Council’s East Godavari and West Godavari districts Graduates’ constituency with a majority of 60,069 votes over another independent candidate Nallamilli Sesha Reddy. At the end of the counting of votes that lasted about 52 hours, Returning […]