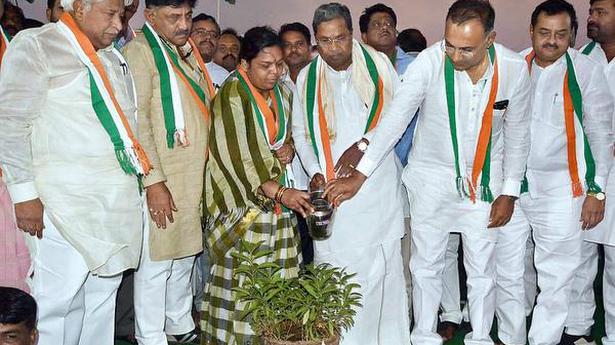 As campaign for the byelection to the Legislative Assembly from Kundagol is gathering pace, a large number of political leaders are likely to visit the constituency in the coming days as winning the seat has become crucial for both the Congress and the Bharatiya Janata Party (BJP).

On Friday, Saunshi, a small town in Kundagol taluk, saw a huge gathering of Congress leaders. The former Chief Minister Siddaramaiah, Ministers D.K. Shivakumar and Satish Jarkiholi, and KPCC president Dinesh Gundu Rao were among the leaders who attended a convention at Saunshi.

For the Congress, the bypoll is a crucial one as it has to retain the seat in view of the volatile political situation in the State, thanks to BJP’s alleged efforts to topple the coalition government.

After reported displeasure by Mr. Jarkiholi on making his Cabinet colleague Mr. Shivakumar the campaign in charge for Kundagol, the party has revised the list of leaders who are in charge of campaigning.

Former Ministers Vinay Kulkarni and Santosh Lad are the “joint in charge”. This apart, there are five coordinators— KPCC general secretaries Naveen Bhandary and S.G. Nanjayyanamath, KPCC secretary Prakashgouda L. Patil, party’s Dharwad urban unit president Altaf Halwoor and rural unit president Anilkumar Patil. All these leaders are set to meet in Hubballi on Saturday to chalk out a plan of action.

Likewise, the BJP too is on a campaign mode, and already many MLAs and leaders are on the ground. The BJP candidate, S.I. Chikkanagoudar, is a relative of party State unit president B.S. Yeddyurappa.

While the former Chief Minister Jagadish Shettar is leading the campaign for the party, he will be joined by Mr. Yeddyurappa, the former Minister Govind Karjol, and Pralhad Joshi, MP. The party has planned a rally on May 5. According to BJP insiders, several of its MLAs and MPs are likely to canvass in Kundagol.

“The average doubling rate of the country is 9.1 days as of now,” the ministry said. Source: thehindu.com Related

On the 87th Anniversary of the Indian Air Force, the Air Force Day parade was held at the Hindon Air force station. The air display commenced with flag-bearing sky divers of the Akash Ganga Team dropping out of an AN-32 aircraft with their colourful canopies. There was also a marching contingent Air Chief Marshal Rakesh Kumar Singh […]