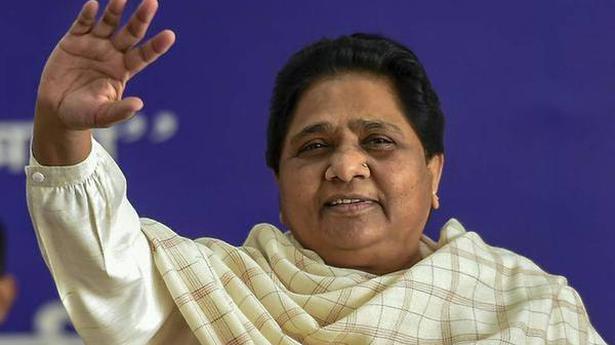 Speculations are rife over a pre-poll alliance between the Congress and the BSP in Haryana after a closed-door meeting between two-time former Chief Minister Bhupinder Singh Hooda and Mayawati in New Delhi, party insiders said on Monday.

The meeting that lasted for over half an hour on Sunday night saw the presence of newly-appointed state Congress President Kumari Selja, too.

Both the parties may have an understanding to jointly contest the elections for the 90 Assembly seats in the BJP-ruled state. The polls are slated for October.

The JJP had offered 40 seats to the BSP, which it refused.

Announcing the decision to end the alliance, Mayawati said the agreement reached with Chautala was “inappropriate” in terms of the proposed seat-sharing formula.

Union Home Minister Amit Shah on Sunday assured the northeastern States that the Centre would never touch Article 371 of the Constitution that grants special provisions to the region.

Mr. Shah, also the chairman of the North Eastern Council (NEC), gave the assurance in his inaugural address at the 68th plenary session of the NEC here. The meeting was attended by the Governors, the Chief Ministers and officials of eight northeastern States. “The withdrawal of Article 370 from Jammu and Kashmir was criticised. Everyone can do so in a democratic country, but it was used to misinform and misguide the people of the northeast about Article 371,” Mr. Shah said.

“There is a vast difference between Article 370 and Article 371,” the Home Minister said.

Article 370 was clearly temporary in nature while Article 371 is about special provisions in the northeast. I had clarified in the Parliament, and I assure everyone in the presence of the chief ministers of the region that the Centre will never touch or dilute Article 371,” he said.

The Congress on Sunday launched an all out attack on the Modi government alleging that there had been “no development” in the first 100 days of its second term, with Rahul Gandhi saying there was a “glaring lack” of leadership, direction and plans where they were needed the most — to turnaround a “ravaged economy“.

Congress’ senior spokesperson Kapil Sibal, addressing a press conference, also alleged that the government’s 100 days in office have been characterised by “arrogance, uncertainty and vendetta politics”.

He attacked the dispensation over issues such as the state of the economy, the situation in Kashmir, the National Register of Citizens (NRC) in Assam and action by probe agencies against opposition leaders.

Taking a dig at the Modi government, Mr. Gandhi “congratulated” it on 100 days of “no development“.

“Congratulations to the Modi govt on #100DaysNoVikas, the continued subversion of democracy, a firmer stranglehold on a submissive media to drown out criticism and a glaring lack of leadership, direction and plans where it’s needed the most — to turnaround our ravaged economy,” he tweeted.

Congress general secretary Priyanka Gandhi Vadra said the Modi government is mum after “ruining the economy” and alleged it is trying to hide the grim situation in the country.

“The government is mum after ruining the economy. The companies are in danger, while trade is in doldrums,” she said in a tweet in Hindi.

“Through drama, deceit, lies, and propaganda, they are trying to hide the country’s grim situation,” she said, using the hashtag ‘100DaysNoVikas’ (100 days, no development).

“Three words that describe the first 100 days of BJP 2.0 – tyranny, chaos and anarchy,” the Congress said earlier in a series of tweets.

Aam Aadmi Party Councillor Tahir Hussain was on Thursday arrested by the Delhi Police in connection with the murder of Intelligence Bureau staffer Ankit Sharma in northeast Delhi during the Delhi riots. Mr. Hussain had applied for anticipatory bail at the Karkardooma court in east Delhi and a decision on his bail plea was to […]

No inquiry against editors in Assam, MHA clarifies

The Union Ministry of Home Affairs said on Friday that it had not asked the Assam government to conduct any inquiry against some editors in the State who have opposed the Citizenship (Amendment) Bill, 2016, terming the information as “absolutely baseless” and “mischievous”. In a statement, the Ministry said that it had been reported in […]