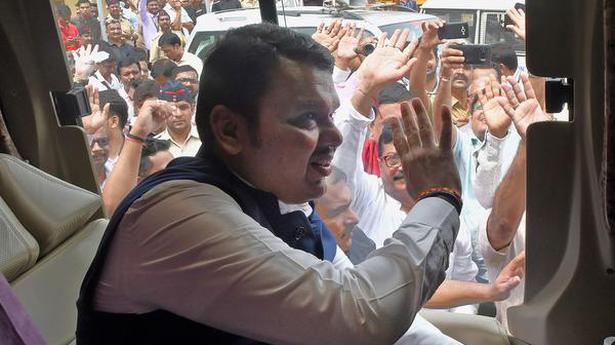 The Election Commission on Tuesday announced that the bypoll to the Satara Lok Sabha seat will be held on October 21 along with the Maharashtra Assembly elections.

The decision to hold the bypoll was taken after the Bombay High Court decided on an election petition on Satara Lok Sabha elections. The order reached the Commission on Monday.

The counting will take place on October 24 when assembly election votes will be counted.

Govt had benefit of low international oil prices since 2014, yet taxes on petrol, diesel raised: Yechury

Hitting out at the government over rising fuel prices, CPI(M) general secretary Sitaram Yechury on Tuesday said that despite the benefit of low oil prices internationally since 2014, taxes on petrol and diesel were raised.

Petrol price was hiked by 18 paise a litre on October 6 and 14 paise on Sunday, according to daily price notification issued by state-owned oil firms.

“This govt has had the benefit of low international oil prices since 2014, yet taxes on petrol and diesel were unprecedented and raised. Relief to rich corporates now has cost govt Rs 1.45 lakh crore: it is making it up by taxing the common Indian,” he said in a tweet.

“Tax on rich corporates reduced, while petrol and diesel prices are hiked continuously! Increasing the common Indian’s misery is the only way this govt can raise revenues?” he tweeted.

Nana Patole, who is heading the Congress campaign committee in the State, on Monday demanded the resignation of Chief Minister Devendra Fadnavis over reports that the State government had allegedly transferred the State police’s salary accounts from nationalised banks to Axis Bank.

Mr. Fadnavis’s wife Amruta is the vice-president of the bank and Mr. Patole said Mr. Fadnavis has to step down from his post to ensure that an effective probe is carried out into the accusations.

According to a petition filed in the Bombay High Court, Mr. Fadnavis misused his powers for the benefit of his wife. It said, “The State government, through a Government Resolution (GR), effected the transfer of the bank accounts to Axis Bank in 2017.” Issuing a clarification on Saturday, Mr. Fadnavis had said, “The GR was passed in 2005 and the accounts were transferred in March 2005, while I married Amruta in November 2005.”

The BJP on Monday expelled Ajay Sonkar from the party after his name cropped up as the main accused in connection with the illicit liquor tragedy in Pathariya Peer area in Dehradun, which claimed six lives.

Six people died and three others took ill after consuming illicit liquor in Pathariya peer slum locality near the Nashville Road in the heart of the city on September 19 and 20.

Mr. Sonkar, a former councillor from the Congress, had joined the BJP after the 2017 assembly polls.

In an attempt to save the Karnataka government, all 21 Ministers from the Congress have voluntarily resigned from the Cabinet. This is to enable the reconstitution of a fresh Cabinet by accommodating disgruntled MLAs. Announcing this on July 8 after a marathon meeting with Congress Ministers and senior party leaders, AICC general secretary K.C. Venugopal […]

Mantralayam TDP candidate Thikka Reddy and Madhavaram ASI Venugopal suffered bullet injuries in their legs in a scuffle between the TDP and the YSRCP workers on Saturday. The incident occurred when Mr. Thikka Reddy was hoisting the party flag in Khaggal village in Mantralayam mandal in the Kurnool district. Irked by Mr. Thikka Reddy’s bid […]

After Manipur, Arunachal wants to be unaffected by Naga peace deal

Arunachal Pradesh has echoed Manipur in demanding to be kept out of any “territorial changes” that might be incorporated in the settlement of the Naga political problem. The Central government has been discussing with the Isak-Muivah faction of the National Socialist Council of Nagaland (NSCN-IM) as well as a rival conglomerate named Naga National Political […]