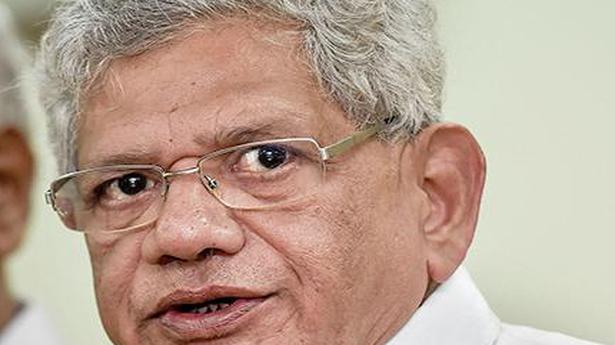 CPI(M) general secretary Sitaram Yechury has alleged the country is facing an “unprecedented economic crisis” because of demonetisation, Goods and Services Tax (GST) and crony capitalism of the BJP-led NDA government.

Addressing an election rally in Dahanu segment of Maharashtra’s Palghar district in support of CPI(M) candidate Vinod Nikole on Sunday, he said the BJP and Shiv Sena need to be defeated to save the country and its citizens.

“There is an unprecedented economic crisis in the country today, because of demonetisation, GST, NPAs (non- performing assets) and crony capitalism of the BJP government,” Mr. Yechury said.

He alleged that there was a move to shut the state-owned BSNL and MTNL to help industrialist Mukesh Ambani’s Reliance Jio.

Uttar Pradesh Deputy Chief Minister Keshav Prasad Maurya has said voting in favour of the BJP will mean “dropping of a nuclear bomb on Pakistan“.

He said the upcoming Maharashtra and Haryana Assembly elections are crucial as these will be the first polls in the country after the abrogation of Article 370, which gave special status to Jammu and Kashmir.

He was addressing a public gathering in support of BJP candidate Narendra Mehta from Mira Bhayander Assembly segment in Maharashtra’s Thane district on Sunday night.

Amid social distancing protocols and a nationwide lockdown, Uttar Pradesh Chief Minister Yogi Adityanath early on Wednesday participated in an event to shift the idol of an infant Lord Ram to a temporary structure in the Ram Janmabhoomi compound in Ayodhya till the construction of a Ram Temple. Mr. Adityanath’s action stares in the face […]

The Supreme Court on Wednesday dismissed a plea of Christian Michel James, an alleged middleman arrested in connection with the AgustaWestland VVIP chopper scam cases, seeking interim bail on the grounds of risk of contracting coronavirus in Tihar jail. A bench of Justices Sanjay Kishan Kaul and B.R. Gavai, which took up the interim bail […]

The Kerala High Court on Tuesday asked the State Government to verify about the insurance coverage taken by the committee of Nadakkavu temple at Thripunithura for display of fireworks. The court issued the directive when a petition relating to the display of fireworks came up for hearing. Meanwhile, the Additional District Magistrate (ADM) told the […]