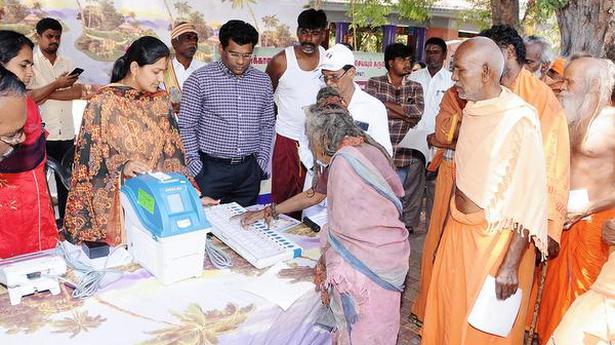 Speaking to transgenders at Vengikal community hall, Mr. Kandasamy said that for the first time VVPAT machines would be used in two Parliamentary constituencies.

The officials also met the sadhus, permanently residing on the foothills of Tiruvannamalai and apprised them of the need for casting their votes. Earlier, the Collector and DRO met the inmates of old age homes and urged them to cast their votes without fail. They have collected forms to include names on Thursday. According to the voters list released on January 31, there are 76 transgenders, 354 sadhus in the district. After these awareness meetings, 278 sadhus came forward and enrolled for voters identity card, said Mr. Kandasamy.

Yellapatar rape and murder case: All accused sentenced to death

The three accused in the gruesome Yellapatar gang rape and murder case were awarded death penalty on Thursday by the designated Special Court for speedy trial. Adilabad District Judge M.G. Priyadarshini, who is also the in-charge Judge of the Special Court, found the crime to be of the ‘rarest of rare’ kind before delivering the […]

Slowdown in the automobile sector leaves MSMEs in the lurch

With the automobile sector witnessing a steep slump in sales, Micro, Small and Medium Enterprises (MSMEs) in Tamil Nadu that manufacture components or do job work for the sector are bearing the brunt of the slowdown. Across the manufacturing hubs in the State, MSMEs working in the automobile sector have reduced their working hours, stopped […]

Well-known political strategist Prashant Kishor met DMK president M.K. Stalin on Monday, after the party roped him in to evolve a strategy for the 2021 Assembly election. “He met Mr. Stalin and signed a contract,” party sources said. Unlike Mr. Sunil, the former chief strategist of the DMK, who worked closely with Mr. Stalin in […]