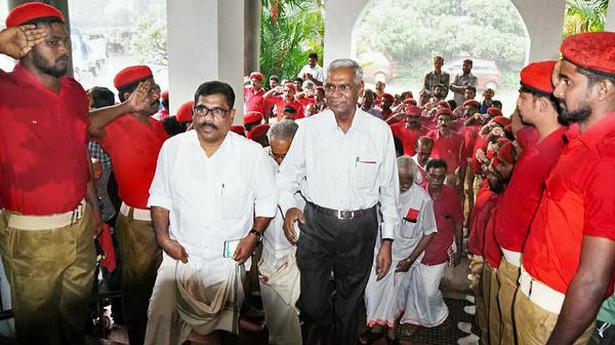 The recent result of Maharashtra-Haryana elections is a blow to the arrogance of the Bharatiya Janata Party and its allies, Communist Party of India (CPI) general secretary D. Raja has said.

Addressing a meet-the-press organised by the Thrissur Press Club on Saturday, Mr. Raja said that though the BJP won the States, it was not a spectacular victory.

“The results indicate that the fall of the BJP has begun. People have started reacting to the misrule of the party,” he said.

He said it was a message to the Congress too. “The Congress was in a defensive mode against the BJP. It should have been in the offensive mode. The results give a message to all secular democratic parties that if they stay united they can defeat the fascist BJP rule,” he said.

“The condition is not normal in Kashmir. People are almost kept under siege. Statehood has been snatched away from Jammu and Kashmir. Thousands have been arrested. People lost their democratic rights. The State has been bifurcated. Kashmir people lost confidence in the government,” he added.

Scrapping of Article 370 was anti-democratic and challenging the federal system. Promises given to the Kashmiris under Article 370 had not been fulfilled yet, he noted.

“The BJP argues that Article 370 was a temporary provision in the Constitution. In that case, Article 371 was also temporary. But Home Minister Amit Shah says that the government will withhold Article 371. This shows the double standards of the BJP,” Mr. Raja said.

The BJP government was utilising the NRC (National Register of Citizens) too to create communal polarisation. They clearly wanted to target Muslim.

Coming down heavily on Modi government’s economic policies, Mr. Raja said the state of the economy was in a shambles.

There was unrest everywhere. Trade unions were going for a nationwide strike in January. Farmers were also planning agitation.

“When Modi speaks about wealth creation, he means only the corporates. That is why Finance Minister Nirmala Sitharaman cut down the corporate taxes. Demonetisation was a disaster. They want to privatise all pubic sector institutions and banks. Modi has even wanted FDI in defence,” he noted.

Indians could withstand the great economic crisis in 2008 because of our stable banking system and public sectors institutions. But by merging banks, funds were being consolidated for corporates.

The Union government could not take a unilateral decision in the issue. It should take all stakeholders into confidence.

Mr. Raja noted that there had been an increased assault on human rights.

Mr. Raja was in Thrissur to inaugurate the 100th anniversary celebrations of Communist International.