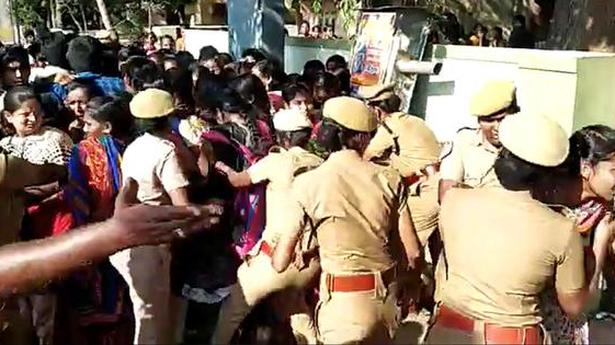 Hundreds of college students, lawyers and members of women’s organisations in the State took to the streets on Wednesday demanding action against the accused in the Pollachi sexual abuse case. Students boycotted classes and staged sit-ins demanding stringent punishment.

Protests rippled across Coimbatore and Tiruppur districts condemning the offenders and seeking protection for women. Students of the government arts colleges in Coimbatore and Udumalpet in Tiruppur boycotted classes and staged a demonstration seeking the arrest of all the persons involved in the scam.

In some places, the students had to be removed by the police by evening.

Advocates practising in Coimbatore staged a demonstration outside the court complex seeking an inquiry committee with a woman judge of the Madras High Court as its head to probe the case.

Members of Democratic Youth Federation of India, All India Democratic Women’s Association (AIDWA) and students staged protests at different places in Tiruchi, Pudukottai and Thanjavur districts demanding stern action against those involved in the case. A group of students of MIET College on the outskirts of Tiruchi staged a demonstration while members of DYFI and AIDWA attempted to lay siege to the Collectorate in Tiruchi to express their condemnation.

All set for polling in Arunachal

Campaigning for simultaneous Assembly and Lok Sabha elections in Arunachal Pradesh ended on Tuesday. The State has two parliamentary constituencies and 60 Assembly seats, but there will be contests in 57 only as three candidates of the BJP won their respective seats unopposed. The elections on April 11 will decide the fate of 181 candidates, […]

‘Vizianagaram will become epicentre of development’

Vizianagaram district will be the biggest and immediate beneficiary if Visakhapatnam is made the executive capital, feel experts and public representatives. Vizianagaram will be close to the proposed capital region if the YSRCP government zeroes in on the Bhimili constituency. The district has a rich past, but does not have proper natural resources and industries […]