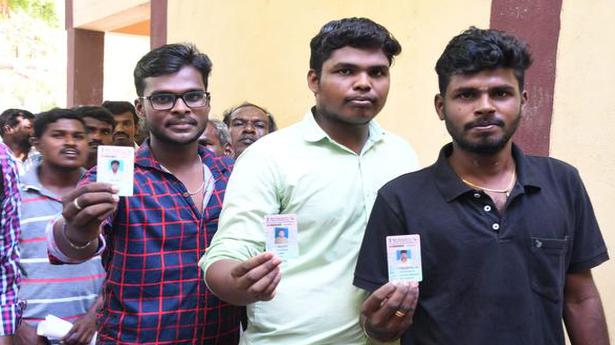 The three Parliamentary constituencies spread over the State capital witnessed the lowest of polling in the entire State. While Chennai North saw 63.47% polling, the same was 56.41% in Chennai South and 59.25% in Chennai Central constituencies.

“This is not the final figure. Once the diaries of polling officers are compared with that of the general observers, there would be minor changes,” Mr. Sahoo told reporters here. There were more men voters than women. Over 2.05 crore men exercised their franchise, as against 2.11 crore women and 1,011 transpersons. The final polling percentage could be obtained on Friday evening, the officer said.

When asked about incidents in various parts of the State, where names of voters were missing from the electoral rolls, Mr. Sahoo said: “There were complaints of some voters’ names missing in some places. We had conducted special camps on 10 days for addition, deletion and correction of names in the electoral rolls.”

Replying to a query on an incident at a polling booth in Nathamedu in Dharmapuri Lok Sabha constituency, where a person claimed to have cast six votes himself, Mr. Sahoo said: “Yesterday, some political parties had raised the issue with us over phone and it has been published in the media too. We have sought for a special report from the DEO.”

The Commission has also sought for a report from DEO over complaints of the missing of names in Kanniyakumari Lok Sabha constituency, he said and added that the Commission will also seek report from areas where large number of names of voters was missing.

Since bypolls are scheduled in four Assembly constituencies across the State on May 19 and for the notification would be issued on April 22, Mr. Sahoo said the Model Code of Conduct would be in place in the respective districts.

To a query on why actor Rajinikanth was inked in his right hand, while the rule stated fingers in the left should be inked, Mr. Sahoo said: “It appears to be a genuine mistake.”

All EVMs and VVPAT units have been moved to counting centres across the State and kept in strong rooms. CRPF personnel would form the first layer of the security ring followed by the State police. “The EVMs and VVPATs were locked in the strong rooms in the presence of the agents of political parties.”

Money seized from the general public for want of documents could get back them on producing relevant documents, he said and added that in the remaining cases, the Income Tax Department would take action.

‘Marathon’ effort by cops to reach out to denizens

Reaching out to public is a major task for the police. As part of the Police Commemoration Week, the department undertook a ‘marathon’ effort in that direction by conducting a run by not only involving denizens, but also in communicating the department’s people-centric activities. Superintendent of Police (Tirupati Urban) Gajarao Bhupal flagged off the 5K […]

Cattle in custody die ‘due to various reasons that include illness and lack of infrastructure’ Source: thehindu.com Related