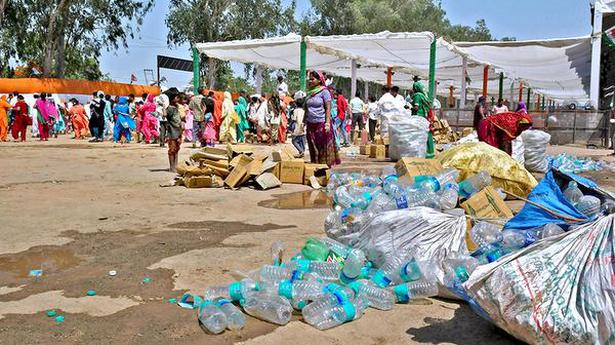 With only three days left for polling for the 2019 parliamentary elections in Haryana, the canvassing by political parties has now shifted into the top gear. Yet for many in Ambala, politics and election promises made by different parties in the run-up to the polls are not a matter of immediate concern.

As scores of party supporters thronged the Gandhi Ground in Ambala to listen to Congress general secretary Priyanka Gandhi Vadra’s speech earlier this week, for 34-year-old Sunny, a lemon juice vendor standing near the entry gate of the venue, it was a day of brisk business and good profit.

Mr. Sunny, who switches between selling lemon juice and vegetables on his handcart, said: “Usually I put up my cart at the city’s main bus stop but today, in hope of earning more money, I came here. I don’t pin any hopes on the Congress or the BJP for better days in my life. Politicians promise several things during election season and then conveniently forget about them.”

“A small permanent shop is all I want, something that can secure the future of me and my family,” said Mr. Sunny, who has been using his cart for over 20 years now and earns between ₹200-₹300 per day.

The Ambala parliamentary seat is witnessing a keen contest between former two-term MP Kumari Selja of the Congress and the incumbent MP, Rattan Lal Kataria of the BJP. Rampal Balmiki of the Indian National Lok Dal, Naresh Saran of the Bahujan Samaj Party-Loktantra Suraksha Party alliance and Prithvi Raj Singh of Aam Aadmi Party-Jannayak Janta Party alliance are also in the fray.

Fifty-two-year-old Rajeev Kumar, another vendor who put up his stall on Jagadhri Road, said there’s a tough fight between the BJP and the Congress in Ambala this time. “Congress’ Selja has an edge as she, during her previous terms, had done a lot of development work while the current BJP MP is hardly seen in the constituency. The local BJP MLA, Anil Vij, who is the Health Minister in the State government, has done commendable work which can benefit the BJP,” said Mr. Kumar.

Ms. Selja, currently a Rajya Sabha MP, had defeated Mr. Kataria on two earlier occasions when she had contested from Ambala in 2004 and 2009. In 2014, Mr. Kataria had won the seat by defeating the Congress’ Raj Kumar Balmiki after Ms. Selja decided not to contest the election.

Vivek (29), who runs an eating joint opposite the Gandhi Ground, also complained about the absence of the sitting BJP MP from the constituency.

“I don’t remember seeing Mr. Kataria in my locality, but yes, our MLA Anil Vij is easily accessible… Thanks to him, the roads have been repaired, the civil hospital has better facilities than before,” said Mr. Vivek. “Earlier, I use to run my eatery on a narrow road, but after the condition of Jagadhri Road improved in the last four years, I decided to shift my eatery to this main road. My business has seen an increase 30%-40% since then,” he said.

“During the BJP regime, I have seen development at least in my vicinity. The image of our country has also improved globally,” he added.

The State government has permitted post-production work of movies from May 4 onwards. A.K. Balan, Minister for Culture and Cinema, said works that nee Source: thehindu.com Related

Karnataka should brace itself for 1 lakh cases: Deputy Chief Minister

Karnataka could have to brace itself for about one lakh cases of COVID-19 in the days to come, said Deputy Chief Minister and Minister for IT and Biotechnology C.N. Ashwath Narayan on Tuesday. “We are expecting requirement of about 20,000 beds and a need for 2,000 ventilators to tide over the crisis,” he said, and […]

A valiant fight that inspired many a battle

‘Sompeta movement’, the mother of all green battles in Andhra Pradesh, which was launched to protect wetland of Beela in Srikakulam district by fighting against the establishment of a coal-based thermal power project, has completed eleven years. It influences others to take up similar agitations to save their ecosystems — Nowpada swamp, Kannedhara hill of […]