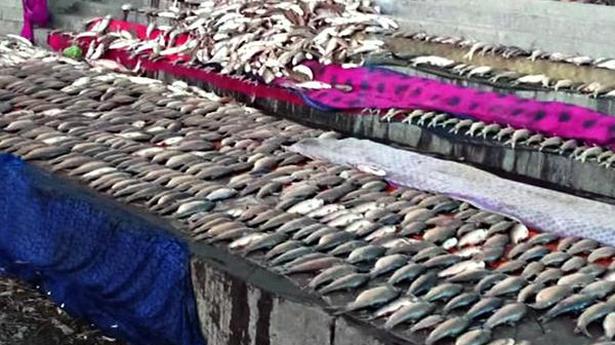 The Maharashtra Pollution Control Board has sought an explanation from the Dehu gram panchayat for the thousands of dead fish found floating in the Indrayani river last week.

“We have sent a notice to the Dehu gram panchayat on Wednesday, directing them to submit their response about the incident within the next 48 hours,” said Dilip Khedkar, regional officer, MPCB.

Mr. Khedkar said the MPCB would take action if the villagers failed to explain the incident in which around 4,000 fish, mostly mahseer, were found dead.

The fish were spotted floating on the Indrayani in Dehu, 30 km from the city on Sunday, sparking panic among residents in the area.

The dead fish included the mrigal carp or white carp fish, rated as ‘vulnerable’ by the International Union for Conservation of Nature and Natural Resources, and a large number of mahseer fish, which holds significant spiritual value among the local people.

“We have sent the collected water and fish samples for analysis and expect the results in a few days,” said Upendra Kulkarni, sub-regional officer, MPCB.

According to the MPCB officials, a sewage treatment plant with the capacity of 3 million litres per day is expected to be constructed by the end of June.

The construction of this STP will help treat the sewage and can be used for irrigation and agricultural needs, said the authorities.

Dr. Sachin Punekar, founder president of the environmental NGO Biospheres, said the MPCB must take immediate action as the deteriorating quality of the river water could prove to be fatal during the ‘wari’(the annual pilgrimage to the shrine of Lord Vithoba in Pandharpur made by ‘warkaris’ carrying palanquins).

Meanwhile, the zilla parishad has banned the use of water from the Indrayani.

A video of the festival showed that residents did not maintain physical distancing and were not wearing masks Source: thehindu.com Related

The Delhi government on Sunday sounded a flood alert for the city and asked people in low-lying areas to vacate their place as the water level neared warning level in the Yamuna river, officials said. The Yamuna was flowing at 203.37 metres on Sunday evening and its water level is expected to rise further on […]