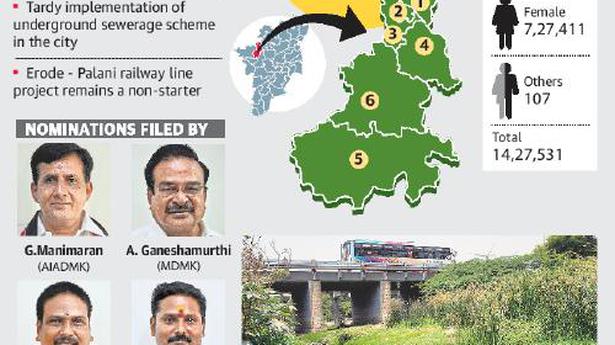 Industrial effluents polluting River Cauvery and the lack of development projects are among the key issues in Erode Parliamentary Constituency. On the farm front, a major grouse is that urbanisation is leading to shrinking of lands for agriculture. Farmers in the constituency are also putting up a stiff resistance to the project for high-tension power lines across farm lands.

A region dominated by the Kongu Vellalar Gounder community, who are into agriculture, textiles, manufacturing, exports and construction, the constituency is also the birthplace of E.V. Ramasamy (Periyar) who founded the Dravidar Kazhagam.

Erode has not been able to overcome the pollution caused by industrial effluents. In the absence of zero discharge effluent treatment plants, textile and tannery industries located in Erode and Kumarapalayam continue to discharge effluents into canals and streams that join the Cauvery.

Pollution continues to be a problem as the State government’s announcement to establish an integrated textile processing park with common effluent treatment plants (CETPs) in Erode, Pallipalayam and Kumarapalayam in 2014 is yet to take off.

The delay in handing over the required land by textile processors and in registering the companies has hit implementation, says president of Federation of All Trade and Industry Associations of Erode District T. Jagadeesan. Many small units were closed as they could not establish their own treatment plants at a huge cost.

M. Chinnasamy, Chairman of Olirum Erodu Foundation that works for environment protection and restoration of water bodies, says the government should take stringent measures to end the discharge of untreated effluents that polluted of cauvery. A

s for the farmers, apart from the high-tension power lines, they are upset over the proposal to run a petroleum line from Coimbatore to Devangonthi in Karnataka, across farms in Erode constituency.

C. Nallasamy, president of Keel Bhavani Vivasayigal Nala Sangam, says the non-implementation of the Swaminathan Commission recommendations for the uplift of the farm sector has forced many farmers to give up farming, he laments.

This time, Mr. Ganeshamurthi is contesting on the DMK’s Rising Sun symbol as his party, the MDMK is part of the DMK-led Secular Progressive Alliance.

There is, however, a bit of a disappointment among the DMK and Congress cadre as the seat was allocated to the MDMK.

Mr. Ganeshamurthi seems to have an edge over the rival AIADMK candidate G. Manimaran, who hails from Kangeyam in the neighbouring district of Tiruppur.

Others in the fray include A. Saravanakumar of Makkal Needhi Maiam and K.C. Senthilkumar of Amma Makkal Munnetra Kazhagam, who is contesting as an independent candidate.

The total number of infected people in the state stands at 116, while 54 of them have been cured. Source: thehindu.com Related

Chief Minister K. Chandrasekhar Rao has said that the Telangana government will unveil a 60-day action plan to establish a new work culture in villages and towns in the light of three new legislation in the State. Speaking after unfurling the national flag to mark the Independence Day celebrations at the historic Golconda Fort, Mr. […]

As a tribute from Assam to Mahatma Gandhi on his 150th birth anniversary on October 2, the first Sanskrit version of Vaishnava Jana To, his favourite devotional song penned by 15th century Gujarati poet Narsinh Mehta, will be released. Ranjan Kumar Bezbaruah wanted to pay homage to Gandhiji in a way no one in India […]