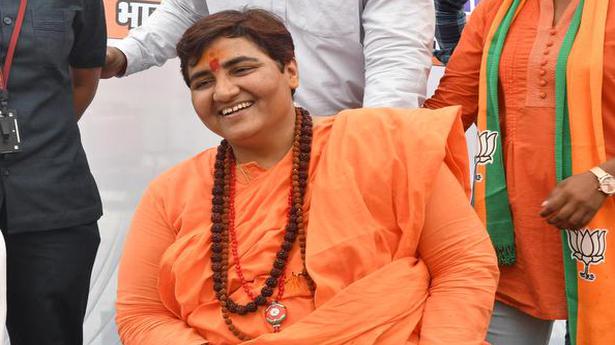 Bharatiya Janata Party Member of Parliament and prime accused in the Malegaon 2008 blasts Pragya Singh Thakur on Thursday filed for an exemption from appearing before the National Investigation Agency court on medical grounds.

Ms. Thakur told the court that she had high blood pressure, because of which she was hospitalised for a day and could not be present in court.

Special judge Vinod Padalkar granted the exemption but said she had to be present on Friday or face consequences as no medical documents were submitted in court.

Ms. Thakur won her seat against Congress leader Digvijay Singh from Bhopal and had earlier filed a plea seeking an exemption from June 3 to June 7 to complete her parliamentary procedures.

However, the court had rejected the plea and directed her to be present in court this week.

On May 21, the court had granted exemption to Ms. Thakur, Lt. Col. Prasad Purohit and Sudhakar Chaturvedi from appearing before it.

On April 23, Ms. Thakur said the pendency of trial was no bar for contesting elections and that there was no provision in the Representation of Peoples Act, 1951 which disqualified a candidate from contesting an election if a criminal case was pending against them and on April 24, the court said it could not stop Ms Thakur. from contesting the elections.

On October 30, 2018, the court had framed charges of murder, abetment and conspiracy under the Indian Penal Code and under several sections of the Unlawful Activities Prevention Act against all the accused.

Death toll due to COVID-19 at 37 in the State. Source: thehindu.com Related

Bandaru Dattatreya, who on Sunday was appointed as the Governor of Himachal Pradesh, is known as a people’s leader in his native Telangana. It has been quite a wait for the 72-year-old Mr. Dattatreya, who was dropped from the Union Cabinet during the first tenure of the Narendra Modi government, and was later denied a […]