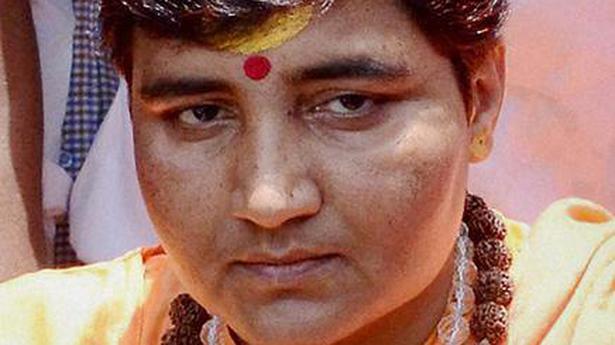 The Bhopal District Election Officer has served a show-cause notice on BJP’s Bhopal candidate Pragya Singh Thakur for her derogatory remarks against police officer Hemant Karkare, who was killed in the 26/11 Mumbai terror attacks.

She has been told to respond within 24 hours.

Ms. Thakur, an accused in the 2008 Malegaon blasts case, had said that the late IPS officer falsely implicated her and because of her curse, he lost his life.

Her statement triggered a sharp reaction from the Opposition parties.

The IPS Association said in a statement, “Ashok Chakra awardee late Sri Hemant Karkare, IPS, made the supreme sacrifice fighting terrorists. Those of us in uniform condemn the insulting statement made by a candidate and demand that sacrifices of all our martyrs be respected.”

The Election Commission has ordered a repoll in 168 booths in the West Tripura Lok Sabha constituency, rejecting the demand of the major Opposition parties for fresh election in the entire constituency. Repoll in polling stations spread over 26 of the 30 Assembly segments of the constituency will take place on May 12. The announcement […]

The Kerala High Court has issued a notice to the Union government on a writ petition seeking to classify natural rubber as an agricultural produce and provide minimum support price for it. The petition was filed by K.A. Joseph, president of the Indian Rubber Dealers Federation, and others. Price of rubber had plummeted in the […]