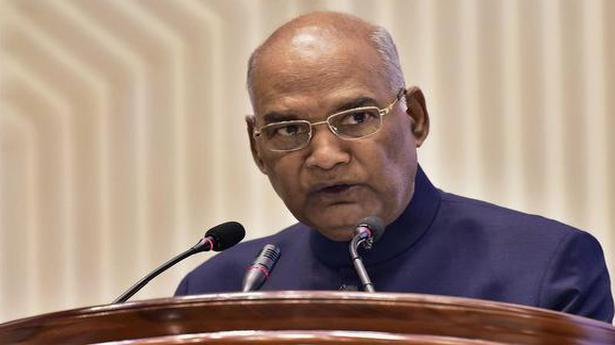 President Ram Nath Kovind will join Britain’s Prince Charles, Chinese Vice-President Wang Qishan and leaders of several Asian countries in attending the enthronement ceremony of Japan’s new Emperor Akihito on October 22. Mr. Kovind, who leaves on Thursday for a four-day state visit in the Philippines, will travel to Tokyo on October 21.

According to officials, about 80 world leaders are expected at the ceremony and banquets, which will be held over two days. Royal families of the UK, Netherlands, Belgium and Saudi Arabia are also among the invitees due to attend.

Mr. Kovind will also visit a Buddhist Temple in Tokyo to plant a Bodhi tree as well as travel to the city of Kakegawa, about 230 km away, to inaugurate an Indian cultural and yoga centre there, funded by a Japanese citizen of Indian origin.

“President Kovind’s visit underlines the deep traditional and civilisational bonds between India and Japan, and shared heritage of Buddhism,” said MEA Secretary (East) Vijay Singh, briefing the media. “His participation in the enthronement ceremony signifies the high importance India attaches to Japan,” Ms. Singh added. No bilateral talks are expected during Mr. Kovind’s visit, although he will attend both the court banquet hosted by Emperor Naruhito and Empress Masako, and a state banquet hosted by Japanese PM Shinzo Abe.

In the Philippines, bilateral talks during Mr. Kovind’s State visit will focus on the joint challenge of terrorism. Indian and Philippines officials will hold a joint working group on terrorism, with a focus on fighting urban terrorism, narco-terrorism, and work on information-sharing on terror groups. India had donated $500,000 to the Philippines for the reconstruction of Marawi city, which had been destroyed during a siege in May 2017 by a terror group claiming allegiance to the Islamic State (IS) in which more than 1,000 people were killed, and the two sides will discuss strengthening counter terror cooperation, officials said.

The Chavyur police on Sunday booked Indian Union Muslim League (IUML) leader Noorbina Rasheed and her son Subin Rasheed on the charges of violating home quarantine rules and hosting a wedding event in the family without sticking to the safety guidelines issued by the Union and State governments in view of the COVID-19 scare. Both […]

Cauvery delta to be declared a protected agriculture zone

Chief Minister Edappadi K. Palaniswami on Sunday announced that the Cauvery delta region would be declared a Protected Special Agriculture Zone as a step towards ensuring food security of the State. The announcement was widely hailed by political parties and farmers’ organisations, while the DMK termed it a “diversionary tactic”. At an official function at […]