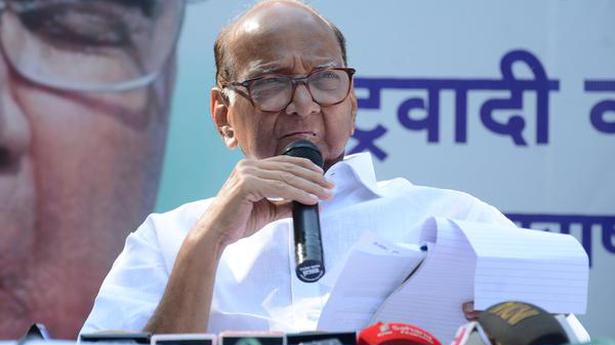 As 14 Lok Sabha constituencies in Maharashtra go to polls in the third phase on April 23, the Bharatiya Janata Party (BJP) is locked in a titanic struggle with Sharad Pawar’s Nationalist Congress Party (NCP) to gain supremacy in western Maharashtra, which comprises ten of these seats.

The prestige of several powerful political clans, including the Pawars’ (in the Baramati Lok Sabha seat), the Vikhe-Patils’ (in Ahmednagar) and the Rane family (in Ratnagiri-Sindhudurg), are at stake here.

While the BJP-Shiv Sena ‘Mahayuti’ is pulling out all stops to obliterate the influence wielded by the NCP satraps, especially the Pawar clan, in the ‘sugar belt’ the contest remains unpredictable owing to the personality-centric politics that have prevailed here for so long.

The weight of the NCP’s influence in this region was proportionately reflected in its seat-sharing with the Congress, with Mr. Pawar’s party fielding candidates in six of the 10 seats in western Maharashtra, leaving only two for the Congress (Pune and Ratnagiri-Sindhudurg), while the others (Hatkanangale and Sangli) were claimed by their ally, Raju Shetti of the Swabhimani Paksha.

“The sugar cooperative has been the political unit in western Maharashtra for several decades, and the politics here has continually revolved round the influential sugar barons and political clans in this region. Despite several nationally prominent leaders hailing from districts here, ‘development’ has generally been restricted to small pockets while pressing civic issues have been completely sidelined,” says a local analyst from Sangli.

According to other observers, the farmer agitations’ over sugarcane and milk prices will have limited impact in a region dominated by realpolitik.

“The leaders here are only concerned about their sugar cooperatives and business establishments. Party loyalties scarcely figure in their calculations. Their internecine rivalries further complicate the equation, making it very hard for a clear picture to emerge for the polls in this belt,” says another political analyst.

The BJP’s game plan to replace the NCP here, and increase its clout, has been to bail out former NCP and Congress-allied leaders, whose sugar businesses today are in economic doldrums. This has been the saffron party’s strategy in at least three key constituencies: Madha, Sangli and Baramati.

Another approach has been to exploit deep-seated antagonisms between the NCP and Congress leaders in this region. In Madha, the saffron party has managed to turn the rivalry between the Pawar and the Mohite-Patil clans to secure the support of sitting NCP MP Vijaysinh Mohite-Patil and his son, Ranjitsinh Mohite-Patil, who has formally entered the BJP’s fold.

According to observers, the prime motivation for Mr. Patil and Mr. Kul gravitating towards the BJP was economic as the ruling party promised to bail out dysfunctional and cash-strapped sugar factories of both leaders.

Mr. Mahadik faces a strong competitor in the form of the Shiv Sena’s Sanjay Mandlik, whose father, the late Sadashivrao Mandlik, was a four-time MP from Kolhapur and an old-time Congressman.

Likewise, in Ahmednagar, the BJP scored a major coup by making the most of the intense rivalry between Mr. Pawar and senior Congressman Radhakrishna Vikhe-Patil, which culminated in the defection of the latter’s son, Dr. Sujay Vikhe-Patil to the BJP, besides driving a wedge in the brittle Congress-NCP relationship.

In Ratnagiri-Sindhudurg, former Chief Minister Narayan Rane, the strongman of the Konkan region, is fighting for the political existence of the Rane family with his son Nilesh Rane (contesting from his father’s Maharashtra Swabhimani Paksha) pitted against the Sena’s Vinayak Raut.

In Pune, the Congress, by naming Mohan Joshi as its candidate has apparently eased the path to victory for the BJP’s Girish Bapat, observers say.

According to them, given the close personal ties that exist between Mr. Joshi and Mr. Bapat, the contest for Pune is virtually a ‘friendly fight’ — a suggestion vehemently and repeatedly denied by Mr. Joshi.

The biggest prize being eyed by the BJP is of course Baramati, the hitherto impregnable bastion of the Pawar clan, where Mr. Pawar’s daughter Supriya Sule is seeking the mandate for the third time.

Yet, it won’t be easy for the BJP to supplant the NCP here. Ms. Sule, who won with a drastically reduced vote margin in 2014, has been vigilant this time, commencing her campaigning well in advance.

The saffron party also faces rifts within its own ranks. In Sangli for instance, the tendency of sitting MP Sanjaykaka Patil to promote NCP turncoats has alienated a number of BJP-Sena loyalists like Prithviraj Deshmukh and Anil Babar.

Furthermore, the entry of influential Dhangar leader Gopichand Padalkar in the fray is expected to hit Sanjaykaka Patil hard. Once a vigorous BJP supporter, Mr. Patil fell out with Mr. Padalkar during the Sangli Zilla Parishad elections.

Meanwhile in Satara, the BJP-Sena, determined to end the stranglehold of two-time NCP MP and royalist Udayanraje Bhosale have fielded a strong candidate in the person of Narendra Patil, son of Mathadi workers’ leader Annasaheb Patil.

The unity of the Congress and the NCP, and the extent to which their leaders can to tide over past differences, however bitter they may have been, will be a deciding factor in the outcome here.

“The NCP must be hoping that if in some cases, as with Mr. Mahadik and Mr. Satej Patil in Kolhapur, the differences prove irreconcilable, they will not damage their candidate’s chances in other seats like Baramati. Here, Congressman Harshawardhan Patil’s swallowing of his 2014 Assembly poll defeat to the NCP, and wholeheartedly supporting Ms. Sule this time around, will be a critical element,” said a Pune-based observer.

With the heavy flood reaching it from Jurala and Tungabhadra reservoirs in the upper reaches of Krishna Basin, the authorities of Srisailam reservoir lifted the crest gates of the project again on Thursday to discharge water downstream towards Nagarjunasagar. According to Irrigation Department officials, three gates were lifted for about 10 feet height each around […]

Five-star hotels must give explanations for overpriced bananas, eggs: Paswan

Five-star hotels charging exorbitant rate for food items like bananas and eggs is ‘unfair trade practice’ and the government will seek explanations from them, Food and Consumer Affairs Minister Ram Vilas Paswan said on Tuesday. Mr. Paswan was referring to a video, that recently went viral, in which actor Rahul Bose was seen complaining about […]