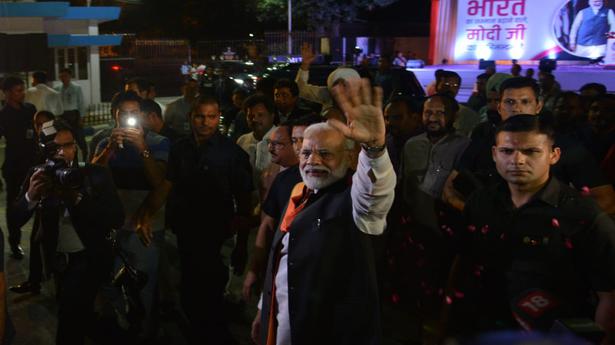 Prime Minister Narendra Modi was greeted by the sights, sounds and dresses of a “Mini India” as part of a grand welcome ceremony organised by the State unit of the JP here on Saturday evening.

Party workers in the thousands, mobilised from across the Capital and showcasing the cultural heritage of their respective States, began assembling at the Palam airport technical area hours in advance of his arrival.

From bhangra performances by the Punjabi diaspora settled in the city to traditional songs being recited in his honour by Poorvanchali attire-clad women hailing originally from Bihar and Eastern Uttar Pradesh, the arrangements were, according to party insiders, meant to somewhat replicate the “warmth” exhibited by the Indian diaspora per se at the “Howdy, Modi!” event in Houston, Texas.

“I am thankful and honoured that so many of you are here…In 2014, too, after winning the [Lok Sabha] elections, I went to the United Nations in the United States and have now gone in 2019. I have felt the difference…the honour of the country has increased in the eyes of the international community and the eyes of the leaders of foreign nations,” Mr. Modi told a relatively small gathering allowed to assemble below a small stage at the airport technical area with chants of “Bharat Mata ki Jai” and “Modi” echoing in the background.

Returning to the Capital after a week-long trip to the U.S., the Prime Minister made a special mention of the participation of politicians from across the spectrum at the Houston event.

The significant numbers in which the Indian diaspora was in attendance at the event, Mr. Modi said, was not limited to Texas but also followed him to New York where he addressed the United Nations General Assembly.

“The “Howdy, Modi!” event was so significant in its scope that not only President [Donald] Trump was there but so were politicians from across the political spectrum — whether Republicans or Democrats…this holds testament to the fact that the stature of India has increased in the eyes of the world,” Mr. Modi said.

“When I reached New York, every international leader I met started the conversation saying ‘Howdy, Modi!’…This is the magnitude of the effect that Indians can have on the world. This is how India can win the hearts of the world…I have seen it with my eyes, I have felt it myself,” he said thanking the diaspora in the U.S. for organising the event.

Before signing off by extending greetings for Dasara celebrations which commence across the country on Sunday, the Prime Minister told his audience about the significance of September 28 which took root three years ago.

The surgical strike by the security forces across the border three years ago on this day, Mr. Modi said, made his return to Indian soil on Saturday evening more memorable.

“Today is September 28. Three years ago, on this day, I could not sleep the entire night…every moment I was waiting for the phone to ring…That September 28 was a momentous day…it was the day when the brave soldiers of our India executed the surgical strike…I take this opportunity to thank and bow my head in reverence to those brave soldiers who have contributed immensely to adding to the stature and honour of the country in the eyes of the international community,” he said.

“Tomorrow, the Navratras begin; the worship of Goddess Shakti will begin…I would like to congratulate the people of the country…thank you once again for coming here.” The Delhi police and other security agencies had a tough time managing the Prime Minister security during the roadshow.

“Earlier, the road show was planned in a moving vehicle but we got the information that the PM will walk on the road during the event after addressing crowd from a stage,” said a police officer.

People of Koppal parliamentary constituency are under the grip of suspense as to who would be the BJP candidate for the Lok Sabha election. Though the Congress has announced Rajashekar Hitnal as its candidate, the BJP has not yet finalised the name of its candidate, even as the process of filing nomination papers would commence […]

Four held in Goa for betting on IPL match