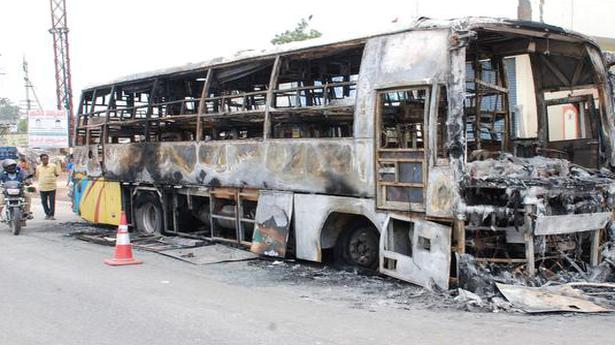 Some 40 passengers and staff of a private travels bus escaped safe and unhurt in the wee hours of Monday, when the vehicle’s engine caught fire that soon spread the whole bus and engulfed it.

None of the passengers were hurt, thanks to the thoughtful and alert driver who pulled over and deboarded all the occupants. Luggage and belongings of a few occupants were, however, gutted in the fire.

According to information, the bus, belonging to one Lakshmi Gayatri Travel Company, going from Hyderabad to Ongole caught fire in its engine area around 1 a.m., when it was near Cherlapally village on the Narketpally-Addanki State highway here.

Eyewitnesses from Cherlapally village, who were drawn to the site by the massive fire, said fire tenders from the Nalgonda fire station came about half-an-hour after the incident.

“The fire spread very fast and the whole bus was in flames by the time the fire engine arrived. Fire personnel were at it for nearly two hours to put out the fire,” they said.

Traffic moved slow on the highway in one lane as firefighting continued. Passengers of the bus were moved to a safe shelter, and later alternate arrangements were made for their travel.

The Nalgonda police suspect the fire accident was caused due to a technical snag. A case has been opened for complete probe.

Toll to be collected on nine more Karnataka State Highways

The public outrage against toll collection on State Highways has not deterred the Karnataka Road Development Corporation Ltd. (KRDCL) from introducing new booths in nine more spots. These include the Mudhol-Mahalingapur-Kabbur-Chikkodi-Nippani (NH)-Maharashtra border (107 km); Magadi-Dobbspet-Pavagada–Andhra Pradesh border road (149.25 km); and Malavalli-Maddur-Koratagere Road (135 km), among others. KRDCL executed the agreements with contractors in […]

The Ministry of Home Affairs has formed a three-member committee headed by retired IAS officer and former Defence Secretary Sanjay Mitra to apportion the assets and the liabilities of Jammu and Kashmir between the two Union Territories of Ladakh and J&K that will come into being on October 31. “As per Section 85 of the […]

Chief Minister Uddhav Thackeray said the government is committed to giving justice to the Dhangar community, after the Opposition raised the issues of the community’s pending demand for reservation, in the Legislative Council on Monday. A special meeting on the matter will be held on Friday. A question by Ramhari Rupanvar (Congress) on the status […]