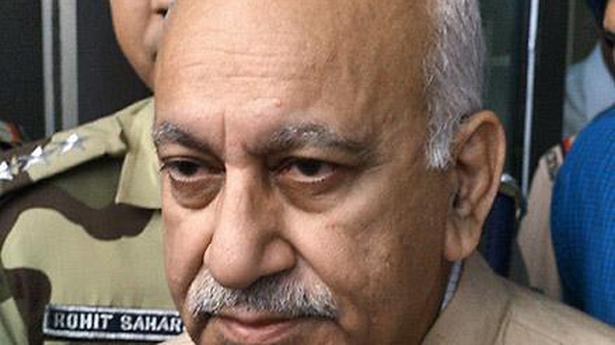 A Delhi court on Wednesday framed defamation charges against journalist Priya Ramani in a case filed by ex-Union minister M.J. Akbar after she levelled allegations of sexual misconduct against him.

Mr. Akbar, who resigned as Union minister on October 17 last year, filed a private criminal defamation complaint against Ms. Ramani after his name cropped up on social media as the #MeToo campaign raged on in India.

Ms. Ramani accused Mr. Akbar of sexual misconduct, a charge denied by him.

The court listed the matter for hearing on May 4 and also granted permanent exemption to Ms. Ramani from personal appearance.

The Central Reserve Police Force has transferred a DIG-rank officer, who is accused of throwing hot water on a jawan who served it to him at a training centre, to the Manipur and Nagaland sector with immediate effect, officials said on Saturday. Official sources said while the transfer has been done pending a detailed probe […]

While the Rajya Sabha is scheduled to discuss The Jammu and Kashmir Reservation (Second Amendment) Bill, 2019 and Lok Sabha has five Bills listed for consideration on Monday, the agenda in both the House has already been set. It is the situation prevailing in Jammu and Kashmir. Home Minister Amit Shah is expected to address […]

Eight vehicles, which were part of NCP MP Supriya Sule’s convoy, were fined after being found parked in a no-parking area in Solapur city, the police said on Sunday. Ms. Sule on Tuesday evening participated in an event, ‘Sanvad Taishi’, a mass outreach campaign, ahead of the Assembly polls, at the Indian Medical Association’s hall […]