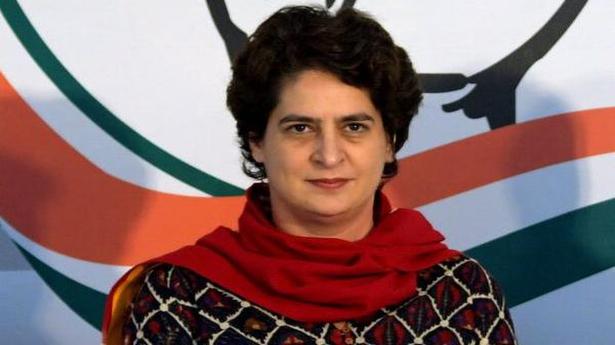 Congress general secretary Priyanka Gandhi-Vadra, who is the party in-charge of East Uttar Pradesh, is expected to meet newly appointed office bearers next week as the party revamped its State unit on the last day of the auspicious Navratri period.

Apart from appointing Ajay Kumar Lallu as State president, the party also appointed four vice-presidents and 12 general secretaries in the State unit. A new 18 member advisory council has been set up to advise the general secretary, while another eight member working group on strategy and planning has been formed.

Ms. Vadra is expected to visit the State on October 14 and spend a couple of days getting feedback from the new office bearers and assign responsibilities. The meetings are important as she seems set to take over as the party’s in-charge for entire U.P. as the Congress attempts a politically revival in the crucial State.

Party insiders claimed that the revamping exercise has tried to balance caste equations with members of major castes finding a place in the newly constituted State unit but the emphasis has been woo the OBC votebank. The group has been given a major chunk with 45% of the posts in the State committee; Dalits have been given 20% while Muslims have got 15%.

Just ahead of the last Lok Sabha elections, the Congress had divided the State unit into West U.P. and East U.P.; Jyotiraditya Scindia was made in-charge of West U.P.

The Congress, however, recorded its worst performance in teh State with Rahul Gandhi, then the Congress president, losing the Gandhi family pocket borough seat of Amethi. Only party chief Sonia Gandhi could manage to win in Rae Bareli. But the Congress would be hoping to get some traction among voters with Ms Vadra leading the party’s fightback.

Coronavirus | Not feasible to evacuate all Indian citizens from abroad, says government

Banking: Lending Gets a Helping Hand

The Journey So Far The government has announced the mergers of several public sector banks (PSBs), reducing the total number from 27 to 12 over the next few years. Finance Minister Nirmala Sitharaman announced the merger of ten PSBs into four entities, which would strengthen balance sheets and allow banks to take bold lending decisions. […]