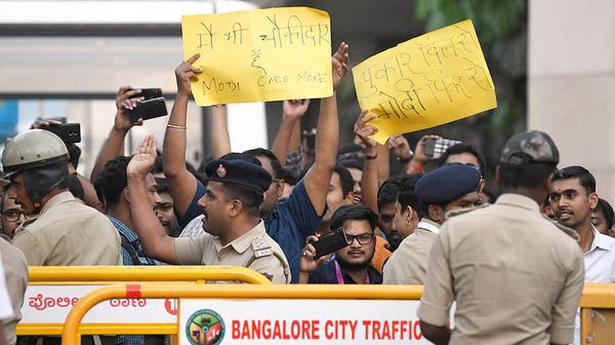 Tension prevailed outside Manyata tech park for a while on Monday evening when a group of people shouted pro-Modi slogans as All-India Congress Committee president Rahul Gandhi arrived for an interaction with entrepreneurs.

This angered Congress supporters, who then began chanting pro-Congress slogans, and the two groups almost clashed twice before being prevented by the city police.

Seemant Kumar Singh, Additional Commissioner of Police (East), Bengaluru, said there was some tension but things were not allowed to escalate. The police took many who indulged in sloganeering into preventive custody and released them later. This came under severe criticism of alleged police partisanship from the BJP.

The State government should provide ₹1,000 crore as initial funding to build new houses for those who lost their houses to floods and landslides in the Nilgiris and the government should declare the district as a disaster-hit region, DMK president M.K. Stalin demanded in a letter to Chief Minister Edappadi K. Palaniswami. In the letter, […]

With people continuing to step out for non-essential activities amidst the coronavirus (COVID-19) lockdown, police across the country have come up with unique ways to highlight the importance of staying at home. Interactive map of confirmed coronavirus cases in India | State Helpline numbers for COVID-19 | e-Book on COVID-19 From making ‘COVIDIOTS’ (a term […]

‘Sidhu-Imran friendship was the key in formation of Katarpur corridor’

The Nijjars, a doctor couple from Batala in Punjab cannot thank enough the friendship of two former cricketers — Sidhu and Imran — which according to them has made possible the opening of a corridor linking revered Sikh shrines in India and Pakistan. Dr. S.S. Nijjar had come with his wife Dr. Satinder Nijjar to […]