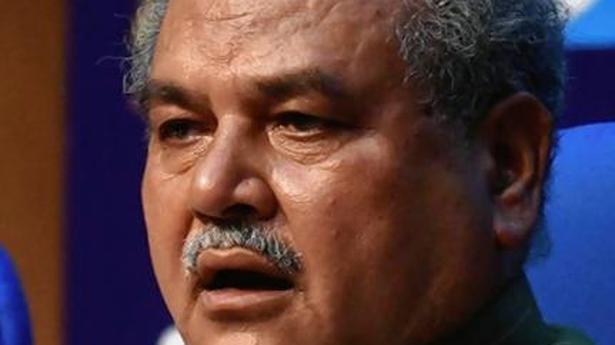 With Commerce Minister Piyush Goyal heading to Bangkok for the ministerial meeting on the Regional Comprehensive Economic Partnership later this week, Agriculture Minister Narendra Singh Tomar has communicated to his counterpart the importance of protecting farmers’ interests while negotiating the trade agreement.

“We have given our inputs to the Commerce Ministry. We have communicated that farmers’ interest is our priority and that must be kept in mind,” Mr. Tomar told journalists on Tuesday, adding that farmers should not suffer losses due to the RCEP pact. He refused to elaborate on any specific concerns that the Agriculture Ministry may have raised or specific safeguards it wants to be put in place.

The RCEP is a proposed free trade agreement between India, China, Japan, South Korea, Australia, New Zealand and the ten member-states of the ASEAN (Association of South East Asian Nations) grouping. Negotiations have been ongoing since 2012 and India faces increasing pressure, with the pact due to be signed in mid-2020.

Some concerns expressed by various industry sectors have been the possibility of large-scale dumping of Chinese goods and the impact on Indian manufacturing, as well as the effect on Indian agriculture if the domestic market is opened up to dairy and farm produce, especially from Australia and New Zealand.

On Monday, Prime Minister Narendra Modi chaired a review meeting on the current status of the negotiations with the Ministers of Home and External Affairs, Finance and Commerce, according to senior officials. Neither the Agriculture Minister nor the Animal Husbandry Minister was present.

Previously, Animal Husbandry Minister of State Sanjeev Balyan has said he has raised the concerns of the dairy industry with the Commerce Minister and been assured by Mr. Goyal that dairy would be left out of RCEP.

R.S. Sodhi, managing director of Amul, India’s largest dairy cooperative, told The Hindu that he has also made presentations to the government regarding the disastrous impact of RCEP. “Dairy is not just a business in India, it’s a source of livelihood for millions. RCEP will cause widespread unemployment and reduce the income of rural farmers. And we don’t need it – government projections show there will be a surplus from domestic production itself,” he said. “At the end of the day, it’s a question of whether you want to help 10,000 farmers in New Zealand or 10 crore farmers in India.”

Ashwani Mahajan, convenor of the RSS-affiliated Swadeshi Jagran Manch, agrees that at the end of the day, it has to be a political call. “So many studies have been commissioned on the impact of RCEP, but the government has to be willing to listen,” he said, adding that apart from dairy, studies showed that Indian wheat and other farm products would also be in danger from Australian imports.

He said the proposed auto-trigger mechanism would not be sufficient to safeguard the interests of Indian farmers and small businesses. “This is a fallacy being promoted by the Commerce Ministry, but it will only cause complications on the ground,” he warned.

National Intelligence Grid to be ready by early 2020

The NATGRID – a robust intelligence gathering mechanism related to immigration, banking, individual tax payers, air and train travels – is likely to be operational by January 2020, officials said on Sunday. The work on the National Intelligence Grid (NATGRID) set up to track any terror suspect and prevent terrorist attacks with real time data, […]

Watch | How can migrant workers be protected?

A video on how to protect the inter-State migrant workers by regulating their employment and working conditions Source: thehindu.com Related

A contentious decision of the Udaipur Urban Improvement Trust to redefine and protect the boundaries of the famous Pichola and Fateh Sagar lakes at their “full tank level” has led to 30% shrinkage in their size and reduced their submergence area to 4.5 sq. km and 2.5 sq. km, respectively. The subsequent construction activities on […]