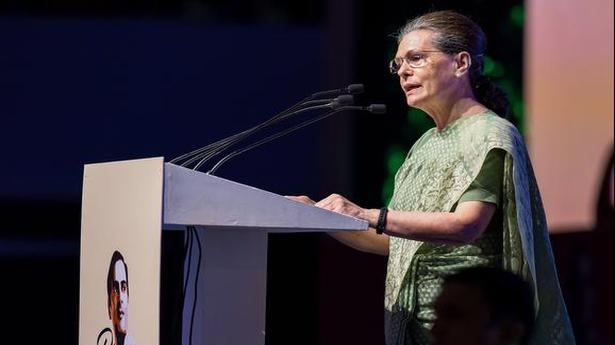 Congress president Sonia Gandhi has convened a meeting of general secretaries and heads of the frontal organisations on November 2.

The meeting is likely to discuss and give shape to the agitational programmes that the party is planning between November 5 and 15 on issues relating to economic slowdown.

General secretary Priyanka Gandhi Vadra too took to twitter to target the Modi government on economy.

“Yesterday, the entire country celebrated a festival for prosperity. But this time everyone has felt that Diwali festivities were lacklustre. The BJP government has grounded the nation’s prosperity and even weakened the Reserve Bank,” Ms. Vadra tweeted in Hindi.

The party also decided to oppose the Regional Comprehensive Economic Partnership (RCEP), a proposed trade agreement among 16 countries including India, China and Australia.

The party held the view that it would adversely affect agriculture, dairy farming, textile, steel and auto industry among others.

“In the present context, all sectors of the economy, agriculture, industry, trade, employment, fisheries are in deep crisis. May be, I can say catastrophe as almost the entire section of people a few are feeling difficult to even manage their day to day life. In this time, it is duty of the government, with all the might and resources, to work for the revival of economy,” former Defence Minister A.K. Antony told reporters last week after a brainstorming session.

Lack of a unified administrative regime, relocation of tribal settlements from the buffer of the reserve, and notifying large extent of the core area as wildlife sanctuary are some of the management issues faced by the Parambikulam Tiger Reserve. The management effectiveness evaluation report points out that a large chunk of the core area of […]

At a Congress workers meeting in Belagavi on Wednesday, it seemed that the senior leaders had buried their hatchet and come together to work for the Lok Sabha polls. Minister Satish Jarkiholi and MLA Lakshmi Hebbalkar, who have had differences in the past, sat alongside and discussed poll strategies. Mr. Jarkiholi told workers that Suresh […]

Asserting that electoral ups and downs are inevitable, Congress president Sonia Gandhi on Thursday said challenges facing the party are formidable but it must continue its ideological struggle against forces of divisiveness. Addressing an event marking Rajiv Gandhi’s 75th birth anniversary, Sonia Gandhi said in 1984 her husband got a massive poll mandate, but did […]