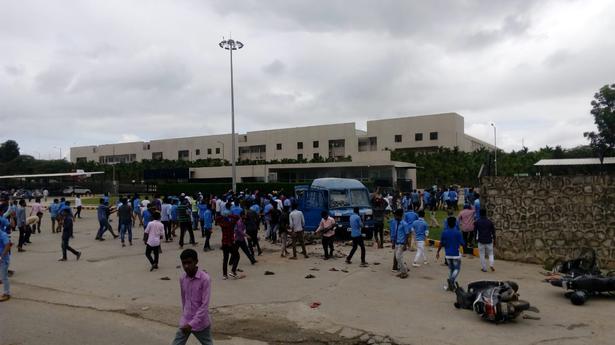 A protest by employees of a textile company in Hassan, alleging harassment by the senior executives, turned violent here on Wednesday.

Many vehicles including a police van were damaged when the protesters threw stones in retaliation to police lathi-charge.

The workers of Himatsinghka Linens in Hassan began the protest around 10:00 a.m., alleging that the company executives assaulted some five employees two days ago. The protesters, a majority from north India, alleged that many have suffered serious harassment in the last few months. Some of the employees, who suffered harassment have gone missing, they alleged.

The protesters wanted their salary dues cleared so that they could return home. They also demanded that the company handover them a general manager allegedly responsible for the harassment.

The police resorted to lathi charge to disperse the mob. Retaliating to the police action, the protesters threw stones at the police and company gate. The angry mob pulled a police van and attempted to set it ablaze. The police then burst tear gas and dispersed the mob. B.N. Nandini, Additional SP, and other officers are camped at the spot.

India and America have reaffirmed their commitment to work together in support of a free, open and inclusive Indo-Pacific region and the two sides agreed to deepen their cooperation to address regional and global threats and to combat terrorism, according to the U.S. State Department. India, the U.S. and several other world powers have been […]

The National Register of Citizens (NRC) authority on Saturday published the individual status of all the 3.3 crore people of Assam who had applied for inclusion in the updated citizens’ registry when the exercise began five years ago. The list – which has the names of those who have been accepted as citizens, those who […]