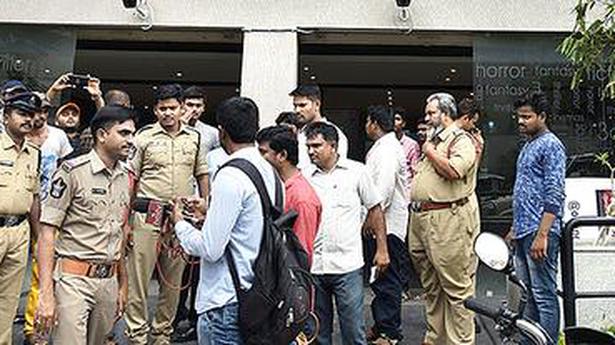 Moviegoers at Anand Cine Complex had erupted into a protest after the air-conditioning had malfunctioned at Screen-2. The people were there to catch the matinee show of Maharshi. The police intervened and defused the situation.

Many people complained that the AC was shut off 30 minutes into the film and that they had to watch the rest of the movie drenched in sweat. The city had registered 40° Celsius on Saturday.

“It was like sitting in an oven,” said a moviegoer, adding that a few children in the theatre had puked, which made the situation worse. The audience then refused to leave the theatre unless their money is returned, which caused the next shows to be delayed by over three hours. The people had paid ₹100 for executive, ₹150 for gold and ₹250 for platinum seats.

Both the air-conditioning systems in Screen-2 had failed while the film was screening. Two Town circle inspector V. Yugandhar said that the audience left after a brief protest and that no case has been registered.

A Delhi court on Tuesday allowed the Enforcement Directorate to interrogate Christian Michel, the alleged middleman who was arrested in the AgustaWestland chopper scam case, inside the Tihar jail in New Delhi. Special Judge Arvind Kumar allowed the ED’s plea to question Michel inside the prison. The court had on Monday asked Tihar Jail authorities […]

Samajwadi Party (SP) president Akhilesh Yadav on Monday called the Centre’s plans on NPR and NRC anti-poor and pitched for conducting a caste census. Mr. Yadav has made the suggestion in the past as well. His demand now comes days after the Odisha cabinet adopted a resolution seeking revelation of caste details in the next […]

Slowdown in the automobile sector leaves MSMEs in the lurch

With the automobile sector witnessing a steep slump in sales, Micro, Small and Medium Enterprises (MSMEs) in Tamil Nadu that manufacture components or do job work for the sector are bearing the brunt of the slowdown. Across the manufacturing hubs in the State, MSMEs working in the automobile sector have reduced their working hours, stopped […]