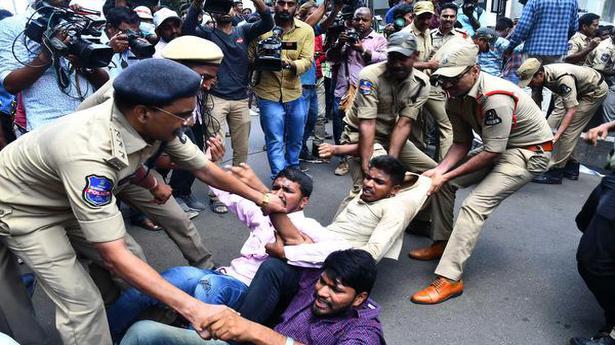 Protests against the “goof up” in the intermediate exam results continued for the third day with students and their parents assembling near Telangana State Board of Intermediate Education (TSBIE) office in Hyderabad, demanding justice for those declared “failed” in recent exams.

Attempts by Students’ Federation of India (SFI) to besiege Pragathi Bhavan, the official residence-cum-camp office of Telangana Chief Minister K. Chandrasekhar Rao, as part of the protest call were foiled, and as many as 24 members were taken into preventive custody, a police official told PTI.

Similarly, scores of activists of Progressive Democratic Students Union (PDSU) and Democratic Youth Federation of India (DYFI) were also detained when they tried to stage demonstrations near the TSBIE office.

The protesters raised slogans against the Telangana government and Chief Minister K. Chandrasekhar Rao and also demanded resignation of Education Minister G. Jagadeeshwar Reddy. They also sought ex gratia for 16 students who committed suicide after the results were declared.

The exams were conducted during February and March this year and the results were announced on April 18. Many students and parents have been agitating against the TSBIE alleging “goof up” in the paper valuation. Since Saturday last, they have been demanding a thorough re-verification of the papers of those who had “failed”. The State government has already constituted a three-member committee to look into the allegations of irregularities in the declaration of the results.

As parents and political parties hit the streets, protesting alleged bungling in publication of intermediate exam results, the Telangana government set up the committee on April 22.

The panel would probe among other aspects if the Globarena Technologies, which provided technological and software support to TSBIE, carried out its functions as mandated in the agreement.

A large number of worried students and parents stated that they were unable to apply for re-verification, revaluation or recounting of answer sheets online as the website was not functioning. Some parents said their children are meritorious and expressed shock that they “failed” in the intermediate exams or had scored very less marks.

Posters to be affixed in front of quarantining houses

The district administration has decided to stick posters in front of residential buildings that house quarantined persons, cautioning visitors against contacting them. District Collector P.B. Noohu said here on Wednesday that the decision was part of the ongoing disease-prevention drive against COVID-19. The poster displays the name and address of the quarantined person, the quarantine […]

‘Stay away from CAA protests on campus’

Amid protests by students against the Citizenship (Amendment) Act in several universities nationwide, Banaras Hindu University on Tuesday advised its students not to participate in any such activities on the campus. The warning came after opposing groups of students held marches over the CAA. While various non-ABVP student groups, under the banner of the Joint […]