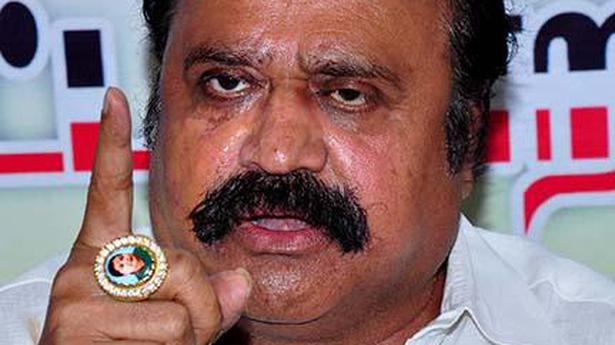 Rebel AMMK leader and the party’s Karnataka unit secretary, V. Pugazhendhi, on Sunday convened a meeting of his supporters and passed a resolution disapproving of T.T.V. Dhinakaran’s leadership.

The meeting criticised Mr. Dhinakaran for boycotting the upcoming byelections to the Vikravandi and Nanguneri Assembly seats.

Mr. Pugazhendhi hinted that his faction may not be averse to extending support to the AIADMK.

“If the party (AIADMK) and the government of Amma (late CM Jayalalithaa) faces a crisis, we will be the first to fight as sepoys,” he said when asked if he and his supporters had plans to join the AIADMK.

Noting that the meeting was held to disapprove of the leadership of Mr. Dhinakaran, he said no decision had been taken on joining the ruling party. Also, there had been no invitation from the AIADMK, said Mr. Pugazhendhi, a loyalist of Jayalalithaa’s aide V.K. Sasikala, who is serving a prison term in connection with a disproportionate assets case.

Chief Justice of India Sharad A. Bobde made it clear orally on January 20 that if the Supreme Court had earlier found it unnecessary to stay the electoral bonds scheme, the court may not stay the scheme even now. The comments came on a fervent plea by advocates Prashant Bhushan and Shadan Farasat that new […]

Status of non-tribals in Meghalaya similar to that of Kashmiri Pandits in 1991, says Governor Tathagata Roy

Meghalaya Governor Tathagata Roy said the status of non-tribal people in the violence-hit hill State was similar to that of Kashmiri Pandits in 1991. Three people were killed and several others injured in violence at Ichamati of East Khasi Hills on February 28 following a meeting the Khasi Students’ Union had convened to discuss Citizenship […]

Analysis: A moment of reckoning for Indian Americans

After Indian American engineer Srinivas Kuchibhotla was killed by a white nationalist in Kansas in February 2017, it took several weeks before the new President, Donald Trump, condemned it, only obliquely still, upsetting the community. Democrat Bernie Sanders instantly came out in support of the family and the community, and said the President’s rhetoric on […]