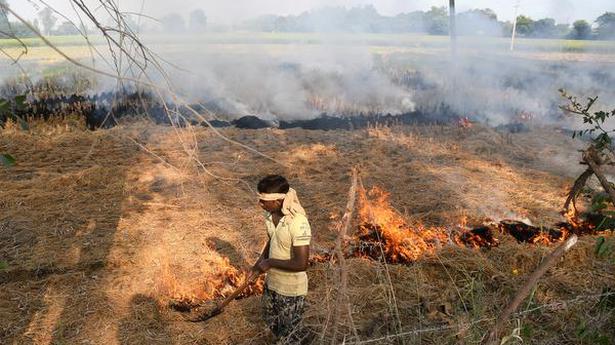 The paddy harvesting season has started in Punjab and the State has already recorded a 45% increase in stubble burning incidents till October 11.

However, the administration hopes the farm fire counts will come down gradually as a result of intensive interventions made this year.

The period between October 15 and November 15 is considered critical as maximum number of stubble burning incidents take place in this span in Punjab and adjoining states and is one of the main reasons for alarming spike in pollution in Delhi-NCR.

On Sunday, Delhi Chief Minister Arvind Kejriwal said, “All the gains achieved so far on pollution front will be nullified. Whereas, we need to do a lot in Delhi and we are trying, however all governments and all agencies need to work to stop crop burning also (sic).”

The National Green Tribunal had also directed the office of chief secretary of Delhi and neighbouring states to constitute special cells for monitoring the problem of air pollution by burning of crop residue, on a daily basis this month.

According to data from the Punjab Pollution Control Board (PPCB), the state had recorded 435 incidents of stubble burning till October 11 last year. This year, the figure has shot up to 630.

Amritsar alone has reported 295 incidents of farm fires during the period. Tarn Taran and Patiala have recorded 126 and 57 cases, respectively.

“Satellites data also include fires at cremation grounds and dump yards. The number of farm fires in Punjab at present is almost negligible. The overall count this year will be less than last year,” he asserted.

The Punjab government gave 28,000 farm implements, such as happy seeder, super straw management system, paddy straw chopper and mulcher, to farmers and cooperative societies on subsidised rates in 2018 and has sanctioned 23,000 more this year, he said.

Farmers claim it is unimaginable for everyone to buy the expensive modern farm machinery to manage stubble.

They say they cannot afford to rent it as the rising diesel prices have increased the input cost manifold.

Mr. Pannu said a financial incentive of ₹100 per quintal of paddy can resolve the problem once and for all.

“The Punjab government is also conducting a massive awareness drive which includes meetings with farmers, radio jingles, and public advertisements on TV and in the print media,” he said.

The Punjab Pollution Control Board has also roped in around 1.2 lakh NSS volunteers from all government universities in the state in the awareness campaign against stubble burning.

“We have formed around 6,000 teams, each comprising 20 members, which have been visiting every village in the state and persuading farmers against burning crop residue,” PPCB chairman S.S. Marwah said.

Mr. Marwah said Delhi itself is “responsible for its bad air and Punjab’s contribution to its pollution is insignificant”.

The Centre-run System of Air Quality and Weather Forecasting and Research, which noticed a spike in stubble burning incidents over the last few days, said these will start affecting Delhi’s air quality now.

“The stubble burning activity in Haryana, Punjab and nearby border regions are moderate but increasing,” it said.

After oscillating between “satisfactory and moderate” categories till October 9, the national capital’s air quality turned “poor” for the first time on Thursday, two days after effigies of Ravana, Meghnad and Kumbhakarana were burnt on Dussehra.

A senior citizen was attacked by a gaur near Thirumoorthy Nagar in Udumalpet, Tiruppur district on Friday, forest officials said. C. Dhanabalan, Udumalpet forest range officer said that A. Kaalisamy (67) was attacked by the gaur when he was shepherding goats in the area. Mr. Kaalisamy suffered injuries on his hip and was admitted in […]

Telangana State BJP president K. Laxman on Thursday flayed Chief Minister K. Chandrasekhar Rao for “always making tall promises to people before elections and forgetting it after winning the elections”. Talking to pressersons at the party office, he charged that whether it was byelections, municipal elections or any other election, KCR mislead the people by […]

Basava Jayanti, which is a major religious event and celebrated with grandeur every year, remained a low-key affair due to lockdown here on Sunday. Un Source: thehindu.com Related