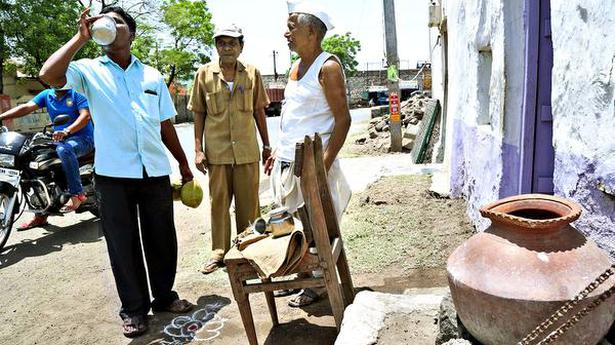 Without worrying about the scorching heat, Gurulingappa Layadagundi (80) waits with a water-filled steel pot outside his small shed-like home on Railway Station Road of the city, for people to offer drinking water.

This has been a routine for this aging man for the last over three decades.

People, mainly autorickshaw drivers, normally do not miss a chance to drink water from him and express their gratitude for offering water.

The demand for water increases during the intense summer as many going to the railway station or passengers coming to the city from afar, need water to quench their thirst.

The old man is always seen outside his home carrying a drinking water pot for needy people. Be it summer, winter or monsoon, giving water to people has become an intrinsic part of life of this octogenarian.

This dhoti-clad man wearing a traditional Gandhi cap says that he will serve people so long he is physically fit.

But what made him to take this up, and also, continue it for over 30 years? “Years ago, when there were only a couple of houses on this lane, many thirsty people were seeking drinking water but not many were offering them. I noticed this, and offered some water initially, but when I noticed that more people were coming to quench their thirst, I began fetching more water to meet their need. Very soon, it became part of my life,” he said.

Speaking to The Hindu, Mr. Layadagundi said that while in winter and monsoon, only a few people drink water from him, in summer, he has a bigger task. “In summer, I offer at least 20 large plastic pots of water to passers-by. My children help me fetch water from a nearby water tap,” he said.

Having worked as agriculture labour decades ago, age has forced him to stay home. However, age has failed to beat his desire to help people.

“I have been watching my father offering water to people from my childhood. Initially, we felt strange. Now, we are not only used to it but also feel proud that despite poverty, he is doing his bit for society,” said Ravi Layadagundi, one of old man’s sons who works as labour in a private factory.

Abdul Hamid Hakeem, one of the neighbours who operates an autorickshaw, is also proud of his neighbour’s humanitarian work.

“He is doing selfless service for decades. It makes us feel happy to live in a neighbourhood where such a great philanthropist lives,” he said.

Slamming statements by B.S. Yeddyurappa, president, BJP State unit, on the collapse of coalition government in the State after the Lok Sabha elections, Chief Minister H.D. Kumaraswamy said that “many such predictions by Mr. Yeddyurappa in the past on the stability of my government were proved false.” Speaking to presspersons at Anavatti village in Sorab […]

Set to enter the second phase of the lockdown imposed to fight the COVID-19 outbreak from April 15 to 30, the Odisha government has made relaxations to kick-start activities relating to agriculture, horticulture, fisheries, forest, drinking water and e-commerce. Announcing modifications in the lockdown guidelines on Monday, State Special Relief Commissioner (SRC) Pradeep Jena said […]

The late Field Marshal Sam Manekshaw once rued that Indian politicians, especially those who headed the defence ministry, could not tell a mortar from a motor, a guerilla from a gorilla and a gun from a howitzer. Manohar Parrikar, the Goa chief minister who passed away on March 17 after a brief but spirited battle […]