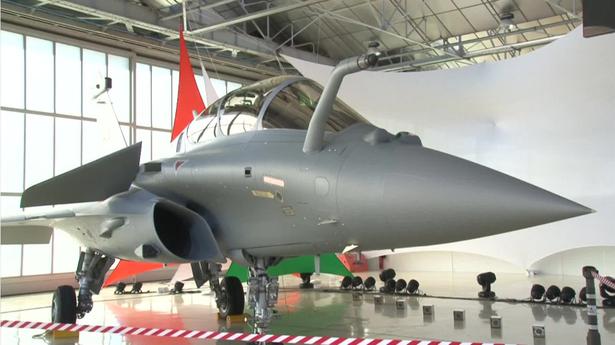 A three-judge Bench, led by Chief Justice of India Ranjan Gogoi, will on Thursday pronounce its verdict on petitions seeking a review of its December 14, 2018, judgment upholding the purchase of 36 Rafale jets by the government.

The review petitioners in the Rafale case, who include former Union Ministers Yashwant Sinha, Arun Shourie and lawyer Prashant Bhushan, alleged that the government had concealed crucial facts and misled the apex court into giving a favourable verdict. They had sought the registration of an FIR and a CBI probe into their complaint against the Rafale purchase.

SC to examine documents published in The Hindu

In March, the apex court, in an order, had agreed to examine various documents published in The Hindu to decide the veracity of the allegations against the Rafale purchase.

“Once Supreme Court had come to the conclusion that on all the three aspects ie., the decision-making process, pricing and Indian Offset Partner, there is no reason for intervention on the sensitive issue of purchase of 36 Rafale fighter aircraft by the Indian government, there is no question of registration of FIR much less any investigation by the CBI,” the government had argued.

The government maintained there was no element of criminality as the Comptroller and Auditor General (CAG) report had rubbished claims made that each Rafale jet was priced ₹1000 crore more than the earlier aborted deal by the UPA government with Dassault for 126 Medium Multi-Role Combat Aircraft (MMRCA). The government said all pricing details, files, documents and records were made available to the team of the CAG which worked out its own aligned cost.

The government had said an enquiry needed to be launched only if the complaint prima facie discloses commission of a cognisable offence.

The government denied misleading the court into believing that the Comptroller and Auditor General (CAG) had submitted its report on the Rafale deal. The petitioners had argued that the court was made to believe this by the government when the reality was there was no such CAG report at that point of time. The CAG report was filed in the Parliament only on February 15.

‘SC misinterpreted statement made by government ’

The government, however, dismissed the error as “misunderstanding of language”. It said the deal was based on the final decisions taken by competent authorities, i.e. the Defence Minister, Defence Acquisition Council, Cabinet Committee on Security.

Investigative reports by N. Ram on the Rafale deal

A big increase in the price of the Rafale transaction can be attributed to the deal having bypassed mandated procedures. The French side took advantage of parallel parleys by the PMO that weakened the Indian team’s position. The government overruled Financial Advisers’ recommendation for an escrow account, and the deal was not on better terms than the UPA-era offer. Here are all of N. Ram’s investigative reports on the Rafale deal.

(If you are viewing this on The Hindu app, click on this link to view the package in your browser)

The Director General of Police (DGP) on Thursday informed the Madras High Court that 43.31 lakh cases had been booked across the State against two-wheeler riders for not wearing helmets between January and August this year. The figure had nearly doubled compared to 22.65 lakh cases booked during the same period last year. In a […]