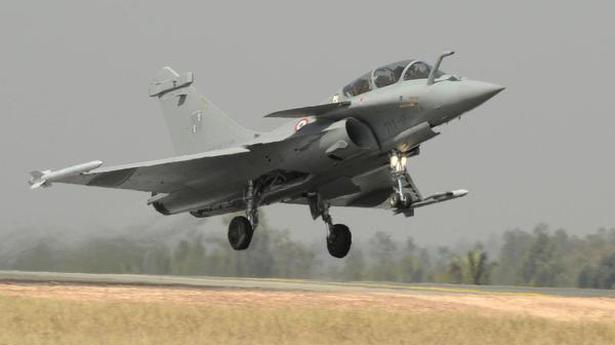 The Supreme Court on Tuesday refused the Union government”s request for a whole month to respond to the Rafale case review petitions and instead gave it five days till Saturday.

A Bench led by Chief Justice of India (CJI) Ranjan Gogoi ordered the government to file its reply in an affidavit “on or before Saturday”.

The Bench also directed the government to respond by affidavit to a separate application for initiating perjury proceedings against those in the government who had allegedly “suppressed” vital documents and circumstances of the Rafale jets’ purchase from the court.

The court upheld the 36 Rafale jets’ deal on December 14, saying it had limited jurisdiction over defence deals.

In another judgment on April 10, the court rejected the government protests to maintainability of the review petitions against the December 14 order.

The brief hearing on Tuesday on the review petitions began with Attorney General K.K. Venugopal informing the court that the government had circulated a letter to all the parties concerned for a deferment of the hearing.

Mr. Venugopal said a fresh response was required from the government as there were new documents annexed in the review petitions. “Give us some time… Your April 10 judgment allowed these documents. There was no formal notice issued to the Union of India,” he submitted.

“If your grievance is that no notice was issued, we will issue notice,” the CJI responded.

At this point, advocate Prashant Bhushan, one of the review petitioners, pointed out that the application filed by them, including former Union Ministers Yashwant Sinha and Arun Shourie, to initiate perjury proceedings against government officials who submitted “false information” in the Rafale case was also listed and the court should issue formal notice on that too.

Though Mr. Venugopal protested, the CJI said the government could very well raise its objections against the perjury plea in a separate affidavit. This affidavit should also be filed by Saturday.

The perjury application submitted that the apex court was “misled” into rendering its December 14 judgment “on the basis of false evidence and suppression of crucial pertinent information by the government in the course of judicial proceedings.”

On April 10, the court declared unanimous support for freedom of Press in a democracy by refusing the government’s preliminary plea to keep the Rafale jets’ purchase documents a secret. It said the documents published first by The Hindu in a series of articles since February last would be considered while examining the merits of the five review petitions.

The government had claimed that the review pleas were based on secret Rafale documents unauthorisedly removed from the Ministry of Defence and leaked to the media. Mr. Venugopal had argued that “stolen” documents came under the protection of the Official Secrets Act (OSA). They were not admissible in evidence in a court of law. Claiming privilege, the government wanted the court to ignore the documents, even if they were found to be germane to the Rafale case, and dismiss the review petitions at a preliminary stage.

Exemption to Kodavas from obtaining gun licence being reviewed: MHA to HC

The exemption granted since 1963 to certain class of people in Kodagu district from obtaining licence to possess and carry firearms under the provisions of the Arms Act, 1959, is being reviewed along with the review of the entire Arms Act to amend the old enactment, the Ministry of Home Affairs (MHA) told the Karnataka […]

Tension spread in Pilakhuwa town, Hapur district of Uttar Pradesh, on Monday morning after a man allegedly died in police lock-up of torture. Three policemen, including the Station House Officer, have been suspended. According to local sources, Pradeep Tomar (30), a resident of Lakhan village, was picked up by police near the Chhajrasi toll plaza […]

A meeting between officials of India and Pakistan to finalise the modalities for setting up of a corridor linking the Gurdwara Darbar Sahib in Pakistani town of Kartarpur with Gurdaspur district in Punjab commenced here Thursday, officials said. The talks are being held at the Indian side of the Attari-Wagah border, they said. It is […]