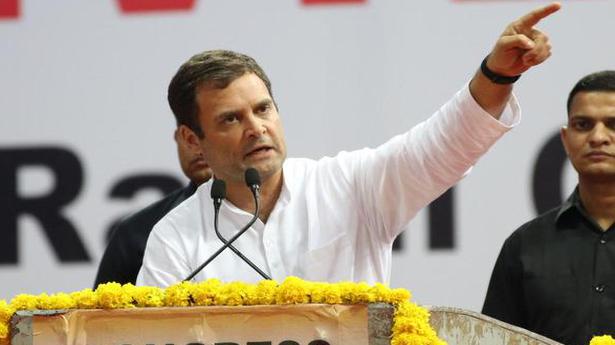 Congress chief Rahul Gandhi on Saturday asked Prime Minister Narendra Modi to tell the nation that it was the BJP government which released terror outfit JeM chief Masood Azhar from an Indian jail.

The Jaish-e-Mohammad (JeM) had claimed responsibility for the Pulwama terror attack in which 40 CRPF men were killed.

“I have a small question for Modi. Who killed CRPF jawans? What is the name of JeM chief? His name is Masood Azhar,” the Congress chief said, adding it was the BJP government in 1999 that sent him from Indian jail to Pakistan through Kandahar in Afghanistan. “Why are you not speaking about it. Why are you not saying that the person who killed CRPF jawans was sent to Pakistan by BJP… Modiji we are not like you. We don’t bow in front of terror. Make it clear to people to India who sent Masood Azhar,” he said.

Pakistan-based Azhar was released by India in exchange of passengers of the hijacked Indian Airlines plane IC-814 in 1999 during the Vajpayee government. Mr. Gandhi also alleged that while Mr. Modi talked about corruption, the whole country knew he was corrupt.

He said the ruling alliance of Congress and JD(S) in Karnataka would fight the Lok Sabha elections together and win it. Mr. Gandhi also accused PM of “fooling” the people of the country for the last five years with his programmes like “Make in India, Stand Up India and Sit Down India”.

Three senior Congress leaders — Sonia Gandhi, former Prime Minister Manmohan Singh and Rahul Gandhi — chose to send in congratulatory letters instead of attending the official ceremony to swear in Shiv Sena leader Uddhav Thackeray as Chief Minister of Maharashtra. In her letter, the Congress’ interim president said the coming together of the Shiv […]

Law schools across India on Tuesday launched a collaborative legal aid clinic for people excluded from the updated National Register Citizens (NRC) in Assam. More than 19 lakh out of a total of 3.3 crore applicants were left out of the Supreme Court-monitored NRC that was published on August 31. Those who were left out […]