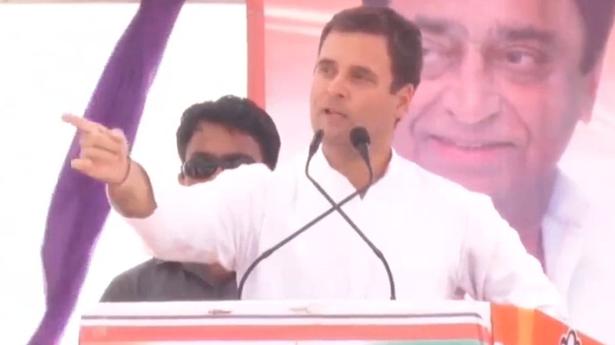 The Congress on Tuesday said the Narendra Modi government had been silent on allegations about Congress President Rahul Gandhi’s citizenship for the last four years because they themselves knew the truth.

Acting on a complaint from BJP MP Subramanian Swamy, the MHA has asked Mr. Gandhi to provide the “factual position” of his citizenship. Mr. Swamy has alleged that Mr. Gandhi had declared his nationality as “British” in documents related to a United Kingdom company that he was a director in.

Mr. Gandhi’s sister and party general secretary Priyanka Gandhi said, “The whole of India knows that Rahul Gandhi is an Indian. He was born and brought up in front of them. What rubbish is this!”.

Congress spokesperson Randeep Surjewala said a similar allegation was raised in 2015 and the question of Mr. Gandhi’s citizenship was settled by the Supreme Court, which dismissed the petition on the issue on November 30 that year.

“Prime Minister Narendra Modi has lost the plot. After the four phases of election, it is clear that Modi ji and BJP are hurling at imminent defeat at a breakneck speed. Consequently, they seek to manufacture one malicious allegation each day. These are rehashed allegation. They had made similar allegation in 2015 too,” Mr. Surjewala said at press conference in New Delhi.

The entire allegation was based one document – the certificate of incorporation for a company called Backops Limited, of which Mr Gandhi was a director. The Congress released the original document on Tuesday, which showed that Mr Gandhi is an Indian. “He is an Indian by birth and everyone knows about the sacrifices made by three generations of his family,” Mr. Surjewala said.

“Is the MHA [Ministry of Home Affairs] bigger than the Supreme Court? Does the BJP not accept the decision of highest court of the country,” Mr. Surjewala asked. Such fake allegations would no longer be enough to distract the voters who were asking the Narendra Modi government about lost jobs and the state of the economy. “We will give a befitting reply,” he said on the MHA’s Monday letter to Mr. Gandhi.

Samajwadi Party supremo Akhilesh Yadav on Friday alleged that the BJP was dividing the society on the basis of caste and religion while the ‘mahagathbandhan’ (grand alliance) was committed to removing hatred. Mr. Yadav said that the BJP showed false dreams to the people and promised them “acche din (good days)” but in reality, did […]

The Greater Hyderabad Municipal Corporation (GHMC) has procured a manhole-cleaning robot called ‘Bandicoot’, which would help end the practice of manual scavenging. GHMC Mayor B. Rammohan inaugurated the ‘Bandicoot’ robotic manhole desilting machine at the Biodiversity junction at Gachibowli in the city on Tuesday, GHMC said in a release. The Supreme Court has issued guidelines […]

‘Don’t pack toys and food together’

The Food Safety and Standards Authority of India (FSSAI) has issued an advisory asking all States and Union Territories to discourage the practice of packing of toys/gifts with food products for infants and small children as there are chances of contamination and risk of accidental ingestion. It has become a common practice for manufacturers to […]