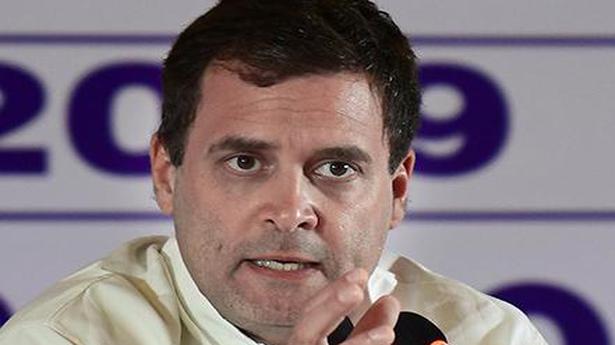 Congress leader Rahul Gandhi, who appeared in two separate defamation cases filed against him in local courts in Ahmedabad on Friday, was granted bail in one of the cases. He had already been given bail in the other matter.

The case where he was granted bail related to a remark made by him during the Lok Sabha campaign in Jabalpur, when he had referred to BJP leader Amit Shah as a “murder accused”. Mr. Gandhi pleaded “not guilty” and was given bail on a bond of ₹10,000 by Additional Chief Metropolitan Magistrate R.B. Etaliya after Gujarat’s leader of the opposition Paresh Dhanani stood surety in the matter.

Before the court proceedings, Mr. Gandhi shared on Twitter a video that showed him meeting with the “Congress family” at a restaurant in Ahmedabad.

The video showed him meeting State Congress leaders including youth leader Hardik Patel, who joined the party ahead of the general elections.

“It was good to connect with members of my Congress family here in the city and to have a meal with them at a local restaurant. I thank them all,” Mr. Gandhi tweeted.

“Yesterday it was Surat, today it’s Ahmedabad – to attend a hearing in yet another politically motivated case filed against me,” he added on Twitter.

Mr. Gandhi’s lawyer moved an application for personal exemption in the defamation case over his remark referring to Mr. Shah, and the court, which set December 7 as the date for the next hearing, said it would consider the application at that time.

The case was filed by BJP municipal councillor Krishnavadan Brahmbhatt, who had called the Congress leader’s remark ‘slanderous’ since Mr. Shah had been discharged in the Sohrabuddin Sheikh fake encounter case in 2015.

That case was filed following Mr. Gandhi’s allegation and tweets accusing the ADC bank of facilitating large-scale exchange of withdrawn currency notes in the wake of the 2016 demonetisation decision. The court had granted Mr. Gandhi bail in this case in July, when he had appeared before it.

For the first time since 2003, an ally of the BJP is expected to face a strong opposition in the Bodoland Territorial Council (BTC) polls in Assam. Elections to the 40-seat tribal council are scheduled in April. The council, established under the Sixth Schedule of the Constitution and headquartered in western Assam’s Kokrajhar town, covers […]

Forest officials reportedly rounded up six woodcutters hailing from Tamil Nadu and recovered 60 red sanders logs weighing 1,850 kg in their possession as part of a regular combing operation in Roallamadugu forest in Rajampet mandal of Kadapa district. Based on a tip-off that woodcutters had sneaked into the forest, the officials took up the […]