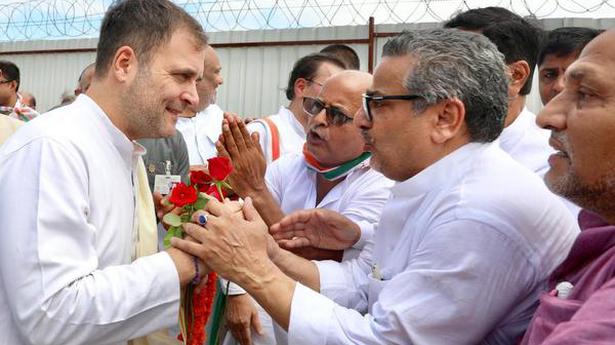 Former Congress president Rahul Gandhi on Saturday was granted bail by a court in Patna on two sureties of`Rs. 10,000 each. While coming out of the court, he said the voice of India was being throttled and he would continue to fight to protect the Constitution and the rights of farmers, labourers and poor people.

Mr. Gandhi appeared before the court of Justice Kumar Gunjan in the Patna civil court in connection with a defamation case filed against him by senior Bihar BJP leader and Deputy Chief Minister Sushil Kumar Modi over Mr. Gandhi’s “Modi” surname jibe made during the last Lok Sabha election campaign in Kolar, Karnataka, on April 13.

Mr. Modi found Mr. Gandhi’s statement “offensive and derogatory”, and filed the case under section 500 of the Indian Penal Code on April 18. He also sought an apology from Mr. Gandhi.

Outside the court, Mr. Gandhi told journalists that those who contested the ideologies of the RSS and Prime Minister Narendra Modi have to face such court cases. “My fight is against the ideologies of the RSS and the BJP, and those who stand up against them are attacked with such court cases. But my fight will continue…I would keep appearing before courts”, he said.

When asked about his resignation from the party president post, he said, “I’ve already explained my position on this”.

Earlier, hours before the court proceedings began, Mr. Gandhi tweeted, “I will appear in person at the Civil Court in Patna today at 2 PM, in yet another case filed against me by my political opponents in the RSS/ BJP to harass & intimidate me”.

“…Our strength in national security has risen. But this strength is not meant to frighten anyone but to secure our country,” Mr. Singh said. Source: thehindu.com Related

Chief Minister B.S. Yediyurappa’s announcement on earmarking ₹10,000 crore for the Upper Krishna Project (UKP) III works has been both welcomed with enthusiasm and viewed with scepticism on the source and adequacy of funding. While several leaders, including former Chief Minister Siddaramaiah and former Water Resources Minister M.B. Patil, have already raised technical points about […]

They want to bring back 14,000 seafarers stuck across the world Source: thehindu.com Related