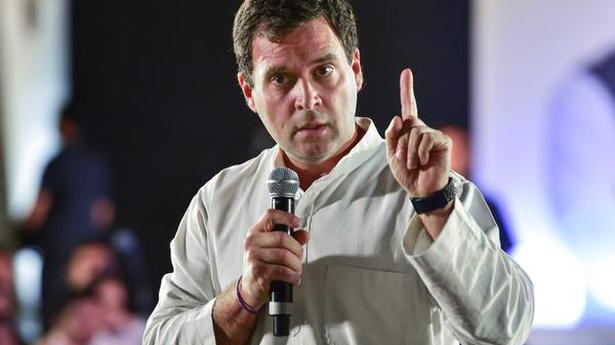 In a show of solidarity against their “common enemy” — the Bharatiya Janata Party — top leaders of the Janata Dal (Secular) and the Congress on Tuesday announced that they would hold a ‘historic public rally’ with Congress president Rahul Gandhi and JDS supremo HD Deve Gowda sharing stage on March 31.

In a joint press conference on Tuesday, the parties said they were committed to defeating the “divisive, communal and anti-democratic” forces in Karnataka in the Lok Sabha elections. The rally will be in Bengaluru-Mysuru region.

Mr. Gowda said, “We are together on everything. Be it any Karyakartas or any leader, belonging to either parties, they should not speak or say anything that would affect the coalition dharma.”

Sometime next month, Prime Minister Narendra Modi will welcome US President Donald Trump on his first state visit to India. Among the highlights of the Trump trip will be a sequel to the rapturous ‘Howdy, Modi!’ event organised in Houston, Texas, in September last year which saw the two heads of state walking hand-in-hand before […]

Theatre personality and social activist Prasanna, founder of ‘Charaka’, a women’s rural handloom cooperative based on the Gandhian philosophy, has been in the forefront of agitations against attempts made to dilute protections given to the handloom sector. He spoke to The Hindu on what ails the sector. Excerpts: What do you think has gone wrong […]

Chief Minister Arvind Kejriwal said on Thursday that the Delhi government is ready to be a part of the regularisation of unauthorized colonies. “We invested ₹6000 cr. towards putting in place several amenities in these colonies over the last 4 years without waiting for an such move from the centre. We had given three to […]