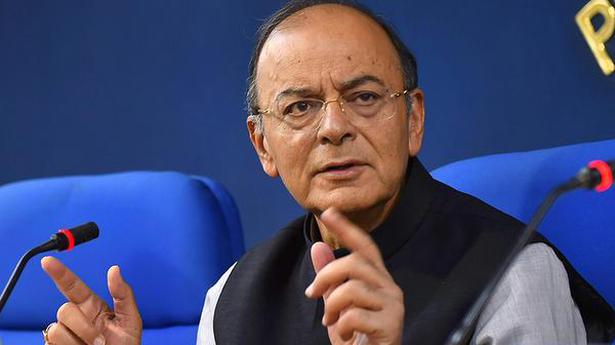 Finance Minister Arun Jaitley on Friday said Congress president Rahul Gandhi is showing signs of desperation as the “fake” narratives built by him over the Rafale jet deal and loan waivers to business houses have evaporated.

In a Facebook post, Mr. Jaitley said the desperation reached a peak when Mr. Gandhi offered four Lok Sabha seats in Delhi to the Aam Aadmi Party without realising that its chief Arvind Kejriwal was “playing games” with the Congress.

“He (Gandhi) displayed the desperation of a loser,” Mr. Jaitley said.

The Minister further claimed that going by the euphoric reaction on the ground, the Bhartiya Janta Party (BJP) would get a larger mandate in the ongoing general elections than what it had received in 2014.

“Rahul Gandhi, in the last one year, built up a fake narrative on Rafale and loan waiver to business houses, which was contrary to the truth. The fake issues evaporated and now strike no chord in the electorate,” he said.

The “desperation of Gandhi was at a climax” when the Congress and the NCP outsourced the job of attacking Prime Minister Narendra Modi to Raj Thackeray without realising the fallout of such a move in Uttar Pradesh, Bihar and other north Indian States, Mr. Jaitley said.

Observing that the Congress and Rahul Gandhi are 48 years behind the times, Mr. Jaitley said India’s social combination and economic profile has completely changed since 1971.

“The Congress is contesting the 2019 election on the 1971 agenda. It is not in tune with the times. The writing on the wall is loud and clear. Those who lived a life of entitlement all through, give up when office seems to be a distant dream,” said the post, titled Has the Congress Thrown its Hands up?.

The ‘New India’ is a positive India, Mr. Jaitley said, adding it does not accept the negativism of Rahul Gandhi, Arvind Kejriwal, Mamata Banerjee and TDP.

Voting for the first three rounds of the elections covering 303 Parliamentary seats are over and there is a “groundswell” for the BJP, he added.

“The Congress is in no position to effectively take on the regional parties or the BJP… The euphoric reaction at the ground suggests a mandate larger than 2014. A 65 per cent to 70 per cent approval rating for an incumbent Prime Minister is unprecedented in India,” Mr. Jaitley said.

The seven-phased elections will be over on May 19 and counting of votes will take place on May 23.

Kerala can include chess in curriculum: Short

Kerala can include chess in the school curriculum to help children improve their concentration and planning skills, Nigel Short, FIDE (Fédération Internationale des Échecs) vice president, has said. The British Grandmaster shared a variety of thoughts on chess at a meet-the-press held at the Ernakulam Press Club here on Saturday. (Excerpts from a Q&A session) […]

Telangana Pradesh Congress Committee (TPCC) President and Nalgonda MP N. Uttam Kumar Reddy described the announcement made by Chief Minister K. Chandrashekhar Rao dismissing over 48,000 RTC employees as un-democratic and un-constitutional. In a statement issued here on Monday, Mr. Reddy alleged that the Chief Minister was trying to suppress the voice and rights of […]