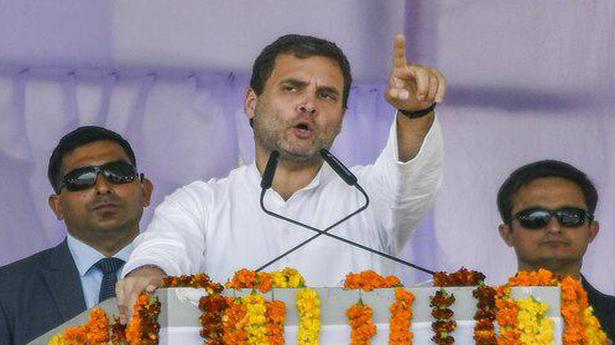 Mr. Gandhi was named the candidate from Amethi in Uttar Pradesh in the first Congress list released earlier this month.

“We had conveyed to Rahul-ji that it would not have been correct to ignore the sentiments of the Congress workers from southern States,” said senior leader A.K. Antony who formally announced the decision.

Congress’ chief spokesperson Randeep Surjewala said the idea is to send a message to Southern States that the Congress respects their culture, language and traditions and Mr. Gandhi will act as a bridge between North India and South India.

The demand for Mr. Gandhi to represent from a southern State was first raised by former Karnataka Chief Minister Sidddaramaiah.

Soon, Tamil Nadu and Kerala also made a similar demand for Mr. Gandhi to represent their States. In their support, Congress leaders from South India had pointed out that Prime Minister Narendra Modi had also contested from Vadodara and Varanasi in the 2014 Lok Sabha elections.

The BJP, however, had targetted the Congress chief been before he took the decision of contesting from two seats. The ruling party alleged that Mr. Gandhi was looking for a safe seat as he will lose the contest against Union Textile Minister Smriti Irani who is contesting from Amethi.

Ms. Irani had unsuccessfully contested from Amethi in the 2014 Lok Sabha elections.

AAP enters into alliance with JJP in Haryana for LS poll

The Aam Aadmi Party and the Jannayak Janta Party on Friday formed an alliance for the Lok Sabha election in Haryana and announced that the latter would contest seven of the 10 seats in the State. The distribution of constituencies and the names of the candidates would be declared later. The JJP was launched in […]

A physics question paper allegedly got leaked at Shanteshwara College in Indi taluk on Wednesday. The paper was found to be circulating on social media after going viral. Deputy Commissioner Y.S. Patil said that according to the norms, any question paper which comes into the public domain after the commencement of exam is not considered […]