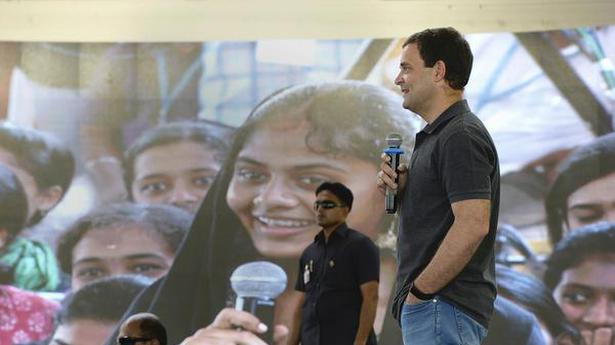 The Election Commission of India (ECI) on Thursday said Congress president Rahul Gandhi’s interaction with students of a women’s college in Chennai did not violate the model code of conduct (MCC), though it has sought a report on his speech.

Tamil Nadu Chief Electoral Officer (CEO) Satyabrata Sahoo said local election officials have reported that there was no violation in terms of permission obtained by Stella Maris College for Women to host the interaction on March 13.

He said the District Electoral Officer (DEO) had informed him that “there was permission” for Mr. Gandhi’s event. “So, there is no violation of the MCC.”

However, Mr. Sahoo has sought “further information” on Mr. Gandhi’s speech. “Have sought further information on what kind of speech was given… have asked the DEO to give report based on the speech content,” he said.

The Tamil Nadu government had ordered an inquiry as to how the college gave its approval for Mr. Gandhi to interact with its students when the MCC was in force.

The Director of Collegiate Education, R Sarumathi, had directed a subordinate official to inquire into the matter.

In his interaction with the students, the Congress president promised 33 per cent reservation in government jobs for women, and answered several of their questions. He had also brought up the issue of the Rafale fighter aircraft deal and reiterated his allegations about the pricing of the plane and the process.

UDF leadership tries to put up a united face

The United Democratic Front (UDF) leadership attempted to present a united face on Monday even as a closed-door meeting of its liaison committee sought to heal the differences within the coalition. P.K. Kunhalikutty, general secretary of the Indian Union Muslim League (IUML), led the efforts to take the edge off the bitter factional feuds in […]

Renowned scientist and cyclone warning specialist Mrutyunjay Mohapatra was on Tuesday appointed as the chief of India Meteorological Department (IMD), according to a Personnel Ministry order. Mr. Mohapatra and his team at the Cyclone Warning Division of the IMD have earned praise for their accurate forecasts on cyclones, its wind-speed and likely impact on life […]