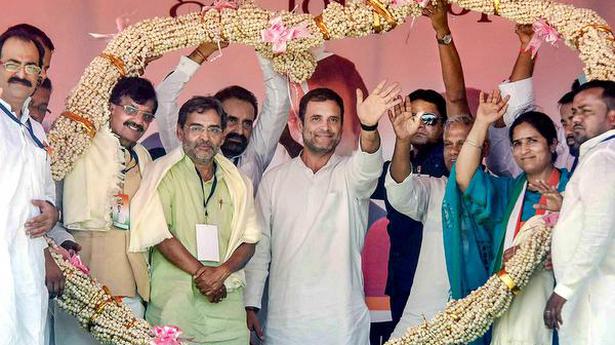 An independent candidate on Saturday raised objections over Congress president Rahul Gandhi’s nomination from Amethi, alleging discrepancies over citizenship and educational qualifications in his election affidavit.

Complainant Dhruv Raj’s lawyer Ravi Prakash showed reporters purported copies of a certificate of incorporation of a U.K.-registered company in which the Congress leader is stated to be a British national.

The Returning Officer has asked Rahul Kaushik, the Congress leader’s counsel, to give his reply on Monday.

Yogendra Misra, the president of the district Congress unit, said the objections would be countered legally on Monday.

The third edition of Mumbai Collective began on Sunday and features sessions on Rafale deal, distortion of history and rise of the surveillance state. R. Ramakumar, chief organiser, had said that they wanted a mass collective, and different kinds of protests, not just speeches, talks, but also cultural forms of resistance: songs, poetry, paintings, photographs. […]

In a setback to the ruling TDP, sitting Yerragondapalem MLA P. David Raju rejoined the YSRCP on Wednesday. The MLA, who joined the TDP after winning the seat on a YSRCP ticket in 2014, told mediapersons here on Wednesday that he decided to rejoin the YSRCP as the ruling party had reneged on its promise […]

Minister points out poor condition of roads in his constituency

Minister for Endowments, and Vijayawada West MLA Vellampalli Srinivasa Rao asked officials of the Vijayawada Municipal Corporation (VMC) to take up repairs of roads and drainages in the constituency. While inspecting the area along with municipal commissioner V. Prasanna Venkatesh and other officials, Mr. Rao told them that roads in many areas are in poor […]