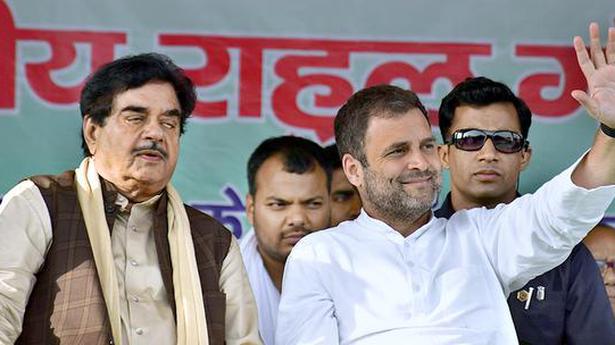 Mr. Gandhi slammed Prime Minister Narendra Modi for promising to put ₹15 lakh in everyone’s account, which was a lie, while the Congress wished to give ‘Nyuntam aay yojana’ (Nyay) to the poor.

“By putting ₹15 lakh in everyone’s account PM Modi would have destroyed India’s economy…you reposed your trust in chowkidar (watchman) but he betrayed you…did anyone here get ₹15 lakh in his account,” he asked. “The Congress with its Nyay scheme will annually put ₹72,000 in the accounts of the poor. This works out to ₹3.60 lakh in five years and will not destroy India’s economy.”

Mr. Sinha too addressed the public meeting for the first time in the company of Mr. Gandhi.

Chief Minister K. Chandrasekhar Rao has expressed the hope that due to the strict implementation of lockdown in the State and quarantining the people affected by COVID-19, the coronavirus transmission may come down in Telangana. He said 15 persons were diagnosed as COVID-19 positive in the tests held on April 22 and possibly that number […]

The Indian Coast Guard (ICG) apprehended six people from Myanmar with banned contraband worth approximately ₹150 crore, about 125 nautical miles east of Little Andaman. They were detained under the Narcotic Drugs and Psychotropic Substances Act, 1985. At about 1200hrs on December 20, ICG Dornier aircraft sighted one non-Indian vessel operating east of Little Andaman. […]