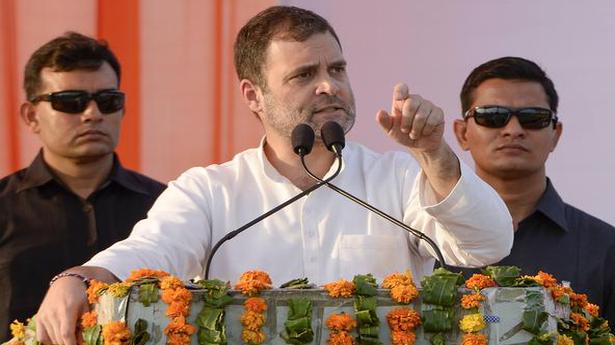 Congress leader Rahul Gandhi is on a “meditational visit” abroad and is likely to return shortly, party sources said on Wednesday.

Responding to speculation on the former Congress president’s absence, Congress chief spokesperson Randeep Surjewala said Mr. Gandhi was away on one of his regular “meditational visits”.

Sources in the party added that Mr. Gandhi is possibly in Indonesia for a meditation session and will be back home soon.

“Shri Rahul Gandhi has gone from time to time in the past on meditational visits. He is currently on one such visit,” Mr. Surjewala said when asked about the former Congress president.

Mr. Surjewala said the party’s 10-day agitation was formalised at a meeting in which Rahul Gandhi participated in, but neither he nor Sonia Gandhi would be participating in the State and district-level programmes.

The Congress has planned a country-wide agitation from November 5 to 15 to highlight issues such as the economic slowdown, farm distress, rising unemployment and job losses and the consequences of the RCEP (Regional Comprehensive Economic Partnership) trade agreement.

“This entire programme was drafted as per his direction and in consultation with him. He guided the party on the various steps and issues that were to be taken,” he said.

In judicial custody and, therefore, away from election rallies, Rashtriya Janata Dal chief Lalu Prasad Yadav is still active politically, via his Twitter handle, which has 4.6 million followers. Taking a swipe at the NDA’s Sankalp rally in Patna, Lalu tweeted that he would have attracted a similar crowd had he stopped at a roadside […]

A.P. likely had a flourishing port 2,000 years ago

A maritime trade centre based out of a fortified settlement near the banks of the Swarnamukhi river in Andhra Pradesh’s Gottiprolu may have had a trade guild with its own army to protect its interests around 2,000 years ago, according to Archaeological Survey of India officials involved in the excavation of the site. ASI superintending […]

A day after deciding to abstain from the United Democratic Front (UDF)’s campaign for Jose Tom Pulikkunnel in Pala, the Congress has kick started efforts to ease the standoff between the two factions in the Kerala Congress (M). Speaking to mediapersons on Sunday, Mr. Joseph confirmed the intervention of the Congress leadership in the issue […]