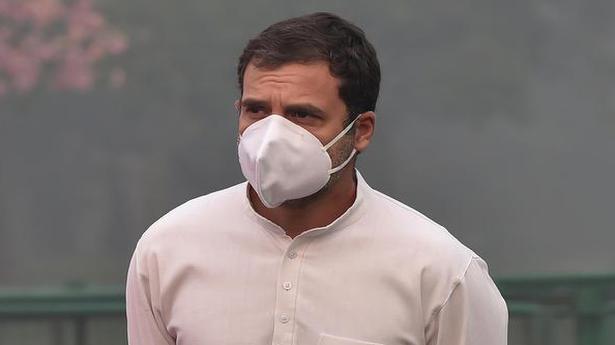 “This is the bitter truth which the Government of India (GOI) tries to cover up by its blatant lies.”

Former Congress president Rahul Gandhi has targeted the Narendra Modi government over its handling of the COVID-19 pandemic and tweeted that the “lockdown pushed millions into poverty, jeopardised their health and compromised the future of students due to digital divide.” Tagging a news report on the findings of the Parliamentary Committee on Health, he tweeted, “This is the bitter truth which the Government of India (GOI) tries to cover up by its blatant lies.”

In a separate tweet, he accused the Yogi Adityanath government of ‘harassing’ the Hathras gangrape victim’s family.

Journalist who exposed salt-roti meal in school booked by UP govt.

Days after he filmed children eating roti and salt in the mid-day meals served in a primary school in Mirzapur district of Uttar Pradesh, a local journalist was booked by police for trying to defame the government through a “conspiracy.” Pawan Jaiswal, a print reporter with a Hindi daily, was charged with criminal conspiracy, cheating […]

The nurses said there had been staff shortages even before the pandemic, and now, in addition to the extra workload, they had unsatisfactory food and accommodation Source: thehindu.com Related

Minutes after rebuke from Nitish in Assembly, Tejashwi walks into his chamber

Minutes after an avuncular admonition by Chief Minister Nitish Kumar on the floor of the Bihar Assembly on Tuesday, Leader of the Opposition Tejashwi Yadav walked into the chamber of his former boss. Mr. Kumar took exception to a snide remark by Mr. Yadav, who keeps training his guns at the JD(U) national president over […]