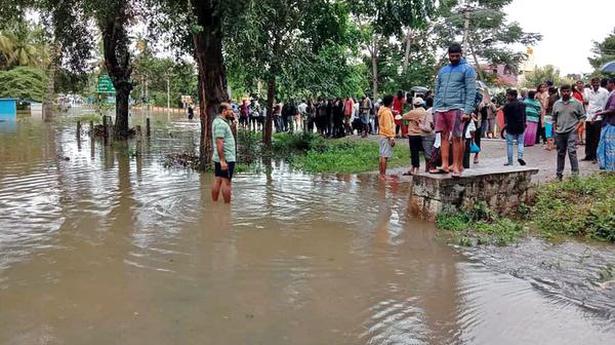 Rains receded in parts of Hassan on Sunday. However, many parts of Ramanathapura in Arkalgud taluk, Sakleshpur and Holenarasipur towns remained inundated.

The inflow into Hemavati reservoir had dropped by a rate of nearly 25,000 cusecs. By noon on the day the inflow was at the rate of 77,500 cusecs, while the previous night it was above 1,05,000 cusecs. As the water level was close to the maximum, authorities kept the outflow in tune with the inflow. As much as 72,500 cusecs of water was released.

Many parts in Arkalgud, Holenarasipur and Channarayapatna taluk were flooded. Road connectivity between Channarayapatna and Holenarasipur was cut off. More than 200 houses were flooded in Holenarasipur town. Lok Sabha member Prajwal Revanna and taluk officers went around villages affected by floods and asked those affected to shift to safer places on Saturday night. He and other leaders of the JD(S) offered Bagina to Hemavati, which is in spate.

The Hassan district administration has made arrangements for food kits for the affected. The CFTRI in Mysuru had sent food material comprising chapati, chutney, rusk and milk products sufficient for 5,000 people. Similarly, Hassan Milk Union provided 10,000 tetrapacks of milk. The Food and Civil Supplies Department has prepared 5,000 kits. Each kit includes 10 kg of rice, 1 kg of edible oil, sugar, salt and 5 litres of kerosene. “We are distributing food kits to those who have been evacuated from flood-hit areas”, said Akram Pasha, DC, Hassan.

The district administration has set up a centre at Ambedkar Bhavan in Hassan town to receive relief material. It will be open from 10 a.m. to 7 p.m. The public can contribute new clothes, bedsheets, blankets, soaps, mosquito nets and food items with a long shelf-life.

The DC also stated that nobody was authorised to raise funds for relief works on behalf of the administration.

Jammu and Kashmir Lieutenant Governor Girish Chandra Murmu on Thursday conveyed his greetings to the people of the union territory on the occasion of Source: thehindu.com Related

The Madras High Court has confirmed the conviction and sentence imposed on 14 individuals involved in the sensational 2008 heist of ₹3.72 crore belonging to popular retail chain Mangal and Mangal and observed that the modus operandi for the crime appeared to have been lifted from Peter Colinson’s movie The Italian Job. Justice P.N. Prakash […]

No PhD students in ISEC for two years

Since its establishment in 1972, the Institute for Social and Economic Change (ISEC) has positioned itself as one of the premier institutions not just in Bengaluru but across the country. However, since 2017 it has been struggling with student intake. For two consecutive academic years (2018–19 and 2019–20), there have been no PhD scholars admitted […]